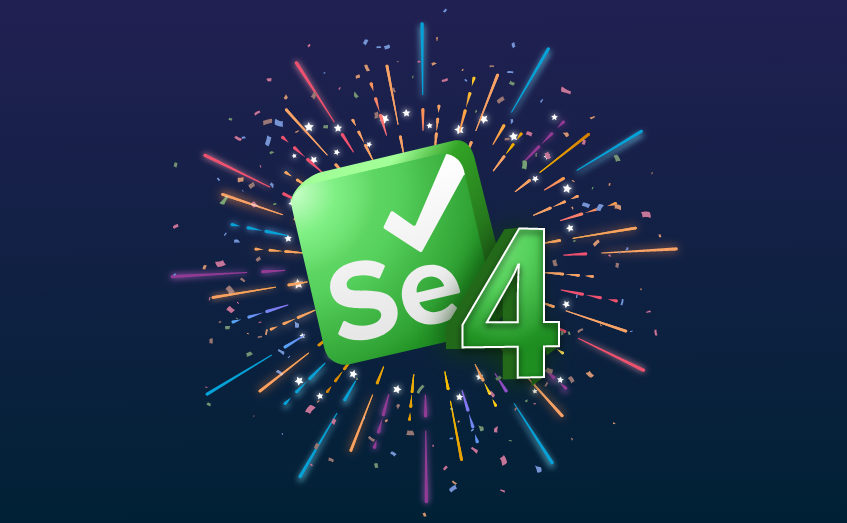 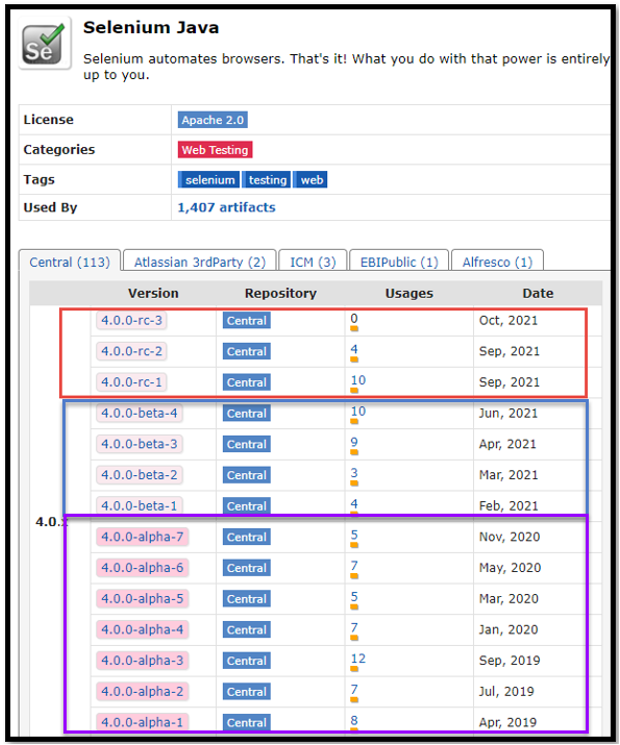 We have been waiting since April 2019 for the official Selenium Release date! Now the long-anticipated wait is over. Selenium 4 is here with some advantageous upgrades. By the end of this article, you will read about the family of Selenium 4 release ✅

There are several new features with the release of Selenium 4. Some of the features include network interception and the ability to authenticate a website using basic authentication or digest authentication.

Selenium IDE records the actions we take on a website then playback those same actions. Prior to Selenium 4, the extension was only available on Firefox. With the new version, we can record then replay a user’s actions on Firefox and Chrome.

The new Selenium IDE features include the Backup Element Selectors, Control Flows, and the Command Line Runner also known as CLI runner. Also, there are plans for Selenium IDE to be available as an Electron app. The Electron app permits us to use the Debugging Protocol and listen out for events from the browser.

Selenium Grid allows us to remotely execute Test Scripts on virtual machines or real machines. We route commands from the client to remote browser instances. The benefit grants Test Scripts to run in parallel across multiple machines, browsers, and operating systems.

With Selenium 4, the Grid has a new feature that involves an advanced architecture with various components. The components include a Client, Router, Session Queue, Distributor, Session Map, Node, and Event Bus. In addition, GraphQL has been added as a new way to query and get data. Here’s a screenshot of the Grid Components from Selenium’s website. 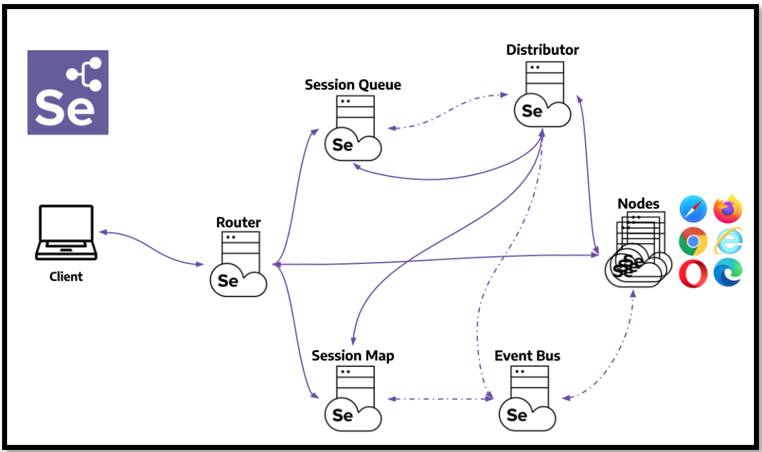 There can be multiple Nodes and the Node can execute sessions in Docker containers or relay commands via a specific configuration. Each Node oversees slots for browsers.

By default, the Node automatically registers all available browser drivers of the running machine. The CPU for Safari and Internet Explorer are different from Chrome, Edge, and Firefox. Only one slot is created for Safari and Internet Explorer. However, one slot per available CPU is created for Firefox and Chromium based browsers (Chrome and Edge).

According to Simon Stewart, the creator of Selenium WebDriver, the W3C WebDriver Protocol is the main reason for upgrading to Selenium 4. It has at least 3 advantages: 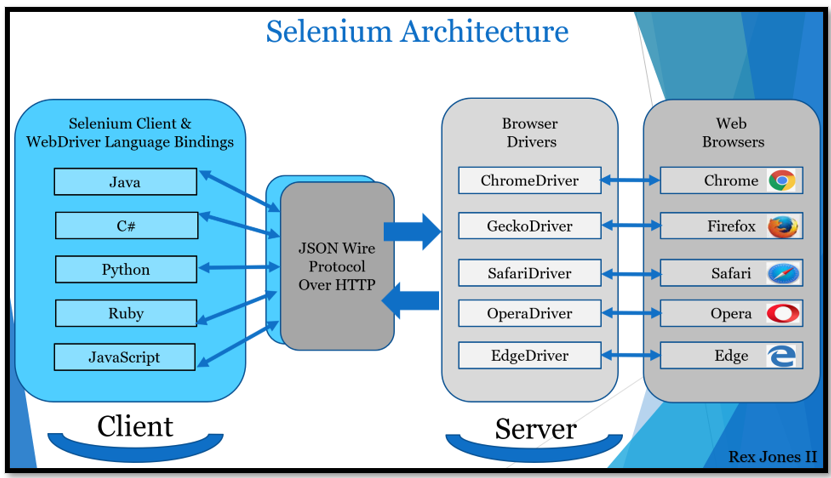 With Selenium 4, the JSON Wire Protocol has been removed from the new architecture. We now have direct communication between the Browser Drivers and Selenium Client & WebDriver Language Bindings. 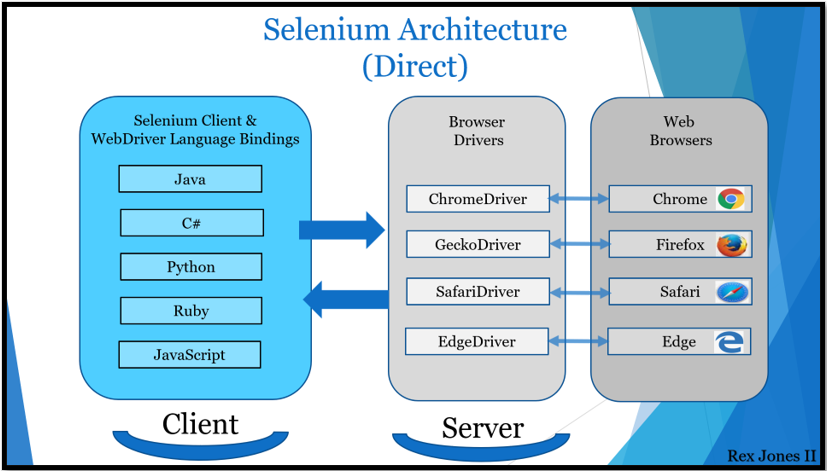 Relative Locators were formerly called Friendly Locators. Selenium 4 provides 5 Relative Locators to find an element or elements located above(), below(), near(), toLeftOf(), and toRightOf() another element.

We have the option of finding a list of elements using a Relative Locator. The Selenium statement consists of List<WebElement> and the findElements() method. Below is a screenshot and code snippet of TestProject’s Addons Library.

An Addon is a collection of coded Automation Actions we can use to empower and extend built-in capabilities. The code snippet shows how our Test Script can combine multiple relative locators to find all platforms (Android, iOS, and Web) using TestProject Addons.

The CDP is a new API feature that’s designed for debuggers. CDP is an acronym for Chrome DevTools Protocol or Chrome Debugging Protocol. We are allowed to take advantage of Google Chrome’s and Microsoft Edge’s debugging protocol. Both browsers are built on the Chromium platform and contain a Developer Tools option.

Elements is the most popular tab for automation, but we also have Console, Sources, Network, Performance, Memory Application, and Security. It’s the same panel if we right-click a page and click Inspect.

Selenium 4 has many methods in a class called ChromiumDriver class. However, 2 methods allow controlling Developer Tools in Chrome and Edge. Those 2 methods are executeCdpCommand() and getDevTools(). The executeCdpCommand allows us to directly execute a Chrome DevTool Protocol command by passing in a parameter for that command. getDevTools is a method that returns DevTools. Here’s a high-level list of what we can perform with CDP:

Now that Selenium 4 is finally here, are you ready to give it a spin?
Which new feature are you most excited about? Share with us in the comments below 😎