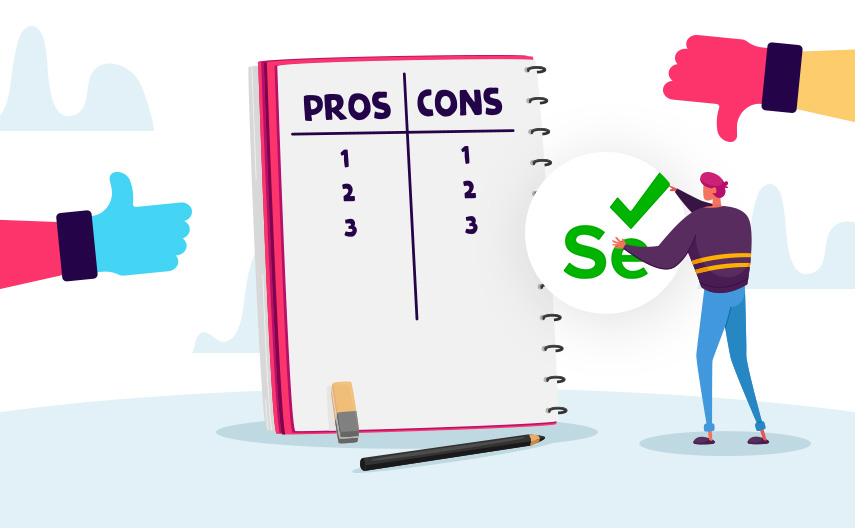 When we are talking about test automation in a group of friends, we always include Selenium in the conversation, because Selenium is one of the best and loved tools for test automation. Both testers and developers enjoy using Selenium. Even though there are a lot of tools available in the market, why is Selenium still the most known and used tool? In this article, we are going to discuss what Selenium is, why you should use Selenium, and the pros and cons of using Selenium. 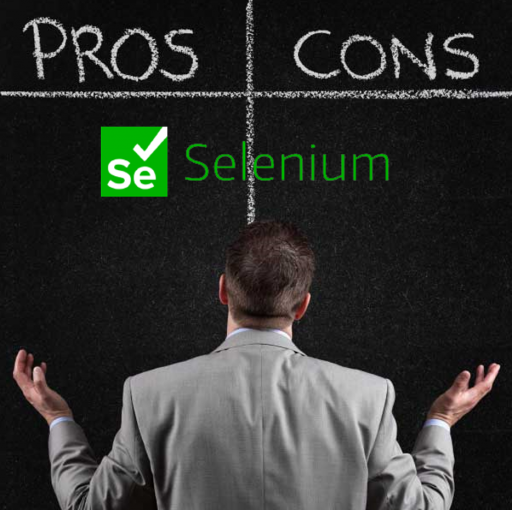 Selenium is a free (open-source) test automation framework used to automate tests in order to validate web applications. Selenium accepts commands and sends them to a browser, and it is implemented through a specific driver to each browser.

Selenium supports most browsers like Chrome, Internet Explorer, Safari, Edge, and Firefox, and some programming languages like Python, Java, JavaScript, C#, and Ruby.

Selenium is composed of three tools:

Selenium is used by a wide community of testers and developers across the world which makes Selenium one of the most popular test automation tools.

When should we use Selenium?

Selenium can be used to automate plenty of test types, such as:

However, Selenium could be used whenever you want to make basic tests in your system. Imagine that you want to access an URL, fill in a form, submit it, and verify if the submission was sent successfully, this can be done using Selenium. You can also use Selenium if you want to verify how your system works in different OS-browser combinations.

Nowadays, we are living in an Agile era, where it is not possible anymore to spend a lot of days running basic manual testing that could be done by an automation script. We must build and deliver new features daily, so, we must test daily. In some cases, companies have to deliver new versions more than once a day, so we must use automation tests in order to make it possible.

It is recommended to have automated tests since the early stages of a software development lifecycle, during the basic features validation, the integration tests between system modules, the acceptance tests on each feature, and in production tests. We can use Selenium during all test phases, in order to benefit from its capabilities and make higher quality products, as we test more in less time.

What are the pros of Selenium? ✅

When choosing a tool, we must analyze its advantages and compare it with the advantages of other tools. In this section, we will understand the greater advantages of Selenium.

It is free and open-source

The main reason that everyone loves Selenium is that it is totally free and open-source. This makes it possible for companies of all sizes to use Selenium in their automated tests, there are no costs and the community is always creating new capabilities, since it is open-source.

Another great thing in Selenium is the long list of browsers, platforms, and languages it supports. Nothing better than a tool that you can automate tests to the most used browsers and operating systems, and even better, you do not need to learn another language to use Selenium, you can continue to use your favorite language, any of the ones you already know.

Below there is a list of all Selenium compatibilities:

Another important benefit is that Selenium can be fully integrated with CI/CD tools like Jenkins, Azure DevOps, Bamboo, Travis CI, Circle CI, GitLab, and plenty of other tools. This is important because one of the best practices in test automation is to use tools to automate test execution, within the development pipelines.

Using Selenium integrated with tools like Appium, it is possible to test mobile devices. Appium is based on Selenium allowing you to use the same capabilities as if you were automating a web page. Selenium with Appium can be used to automate Android, iOS and Windows Phone applications, even if it is a native, hybrid, or mobile web app.

With Selenium Grid, you can run tests in parallel and control the execution at a central point. This is a great thing because it is known that execution time for web tests increases over time, and with parallel execution, we can have a very interesting gain from the moment that our test suite is very large.

As said, Selenium is a common topic when talking about test automation. Almost 30% of automation tools are based on Selenium (take for example TestProject‘s 100% free test automation platform which bundles up Selenium and Appium for you with a bunch of added functionalities!), and more than 50k companies are currently using Selenium in their test automation frameworks. So, we have a huge number of professionals involved daily with Selenium, making the community always active through blog posts, courses, forum questions, and resources created to help each other.

What are the cons of Selenium? ❌

Despite being a powerful tool, Selenium has some disadvantages that it is important to know in order to help in decision-making moments.

Selenium only works for web test automation. Although we can do everything within a browser using Selenium, we can only use Selenium to do things within the browser. It is not possible to automate desktop applications, for instance.

Selenium does not have a built-in image comparison that it is important to validate that images that should be displayed in the application are there, and are correctly shown. To do this, third-party libraries must be used to have this capability. Alternatively, you have tools such as TestProject that are built on top of Selenium and empower its native functionalities with out-of-the-box features and over 1,500 ready-to-use automation actions such as Image Comparison actions you can explore here.

A basic feature that Selenium does not have is reporting. All testers or developers need to create reports with test automation results in order to present them to managers, contractors, customers, and stakeholders. To have this capability in Selenium, we also must integrate with third-party libraries and frameworks in order to collect execution data and generate a test report. Tools like TestProject provides such Selenium dashboards and reporting features out-of-the-box, at no cost and without any need to integrate 3rd party tools.

The difficulty here is about locators that we should use in our test automation scripts. Once a locator is modified, we always need to update our test code. Solutions with AI tools can better handle this type of situation, making the maintenance cost of test scripts cheaper.

Even though there is a large community of professionals working with Selenium, looking for solutions is not simple. The lack of a supportive company behind Selenium may be a difficulty for beginners.

Without any doubt, Selenium is the most widely used test automation tool in the world. The advantages and features that the framework provides are very interesting, and thousands of companies around the world are using Selenium at this moment to automate their testing.

There are tools such as TestProject that allow the use of Selenium APIs in tests created on the platform, which make the use easy, as it does not require the installation of Selenium and several other tools, such as the Appium for mobile tests, and reporting libraries because TestProject already has them built-in. In addition, using Selenium within TestProject gives you the possibility to continue using any language you love with OpenSDK and a way of working that you are already used to with Selenium, but obtaining several other benefits and extra features.

Learning Selenium is a good thing that you can do right now! What are you waiting for? 😎