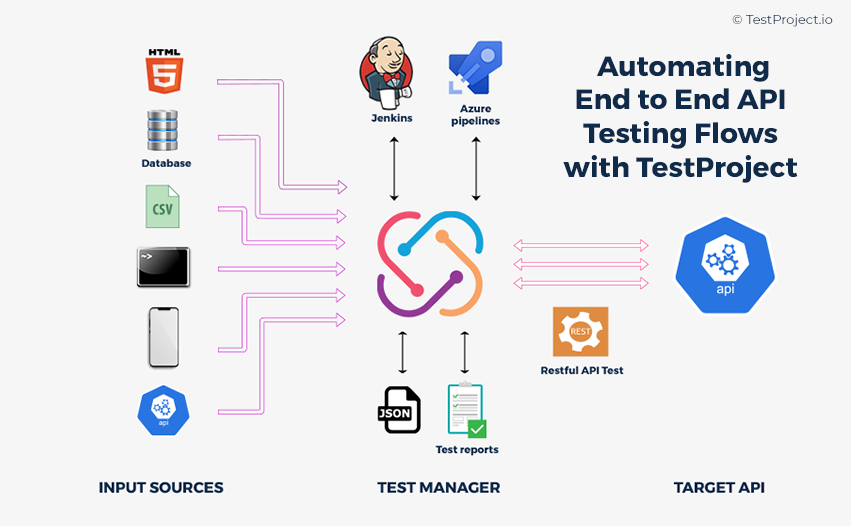 APIs are an important interface in the modern computing world, where an increasing amount of applications and sites are hosted on online cloud platforms. APIs allow for communication between different applications which are built on service-oriented architectures, many different companies use the public API approach to share and make their tool more accessible to various users from external sources. Of course, all these APIs must be tested to ensure their functionality and usability, despite lacking a graphical interface and requiring a more programmatical approach, which can make the API testing flows more challenging and intimidating.

There is no doubt that Postman is the #1 tool when it comes to testing your APIs manually, but when it comes to API automation, scheduling and reporting as part of end to end API testing flows, it becomes more challenging.

End-to-end API testing flows can involve multiple input sources, such as HTML, Databases, Telnet/SSH, Mobile, Shell, Data files, other RESTful APIs and more. TestProject‘s test automation platform allows not only testing your APIs manually, but also to complete end-to-end API based test automation flows, schedule and run them periodically, get execution reports and all of that without any third party tools and without a single line of code 🚀

This hands-on tutorial consists of step-by-step examples and real automated test flows, shared here for you to use and practice while automating your APIs.

After going through these examples, you should be familiar with the TestProject platform and its capabilities when it comes to API test automation. In each chapter, you will also have full access to the example tests shared with you via TestProject:

If you’d like to receive even more information, you can find a couple of video tutorials here as well (Part 1 & Part 2), or review these resources: