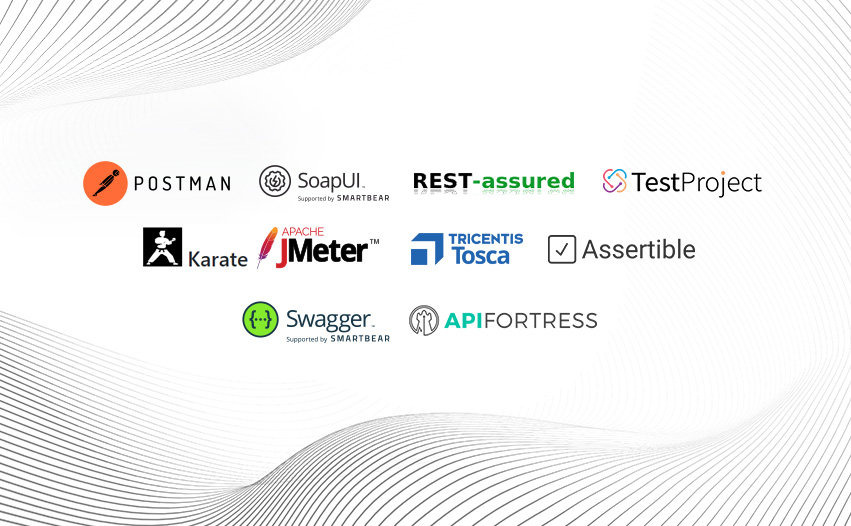 If you’re like many companies out there, API’s (Application Programming Interface) are becoming a frequent topic of conversation, if they weren’t being talked about constantly already. In fact, many of the fastest growing companies like Stripe, Twilio, and Plaid are growing to billions of dollars in revenue with only an API interface.

In previous articles on the blog, you can explore API testing key terms, keys to REST API testing success and even emerging trends in API testing such as consumer contract testing. In this article, we will focus specifically on the top API testing tools you should keep an eye out for in the market.

Before we get into ranking the list of API testing tools, let’s consider some of the key criteria we should use for evaluating our candidates:

Now, since the technology & process has evolved a lot than before, companies or teams prefer to have faster test feedbacks. As we can see with the shift-left trend towards DevOps, API testing is becoming a more crucial & critical component on CI/CD. Test automation efforts can bring more value with the right API tests in place, rather than depending on slow UI tests only.

When it comes to API testing, the very first tool which comes to mind is Postman. With over 11 millions users, Postman is easy to adopt for beginners all the way up through expert users. The tool can be used to explore and understand API’s, and then later leverage those findings to create and execute automated scenarios as well.

It was initially launched as a Chrome plugin, but has evolved to provide native versions for Mac & Windows, making the solution ideal for those who want to test APIs without much coding efforts.

If you want an easy to use, yet full featured toolset to explore API’s and automate your API testing, Postman is a great choice.

SoapUI is a Complete API Test Automation Framework from SmartBear, which allows users to test REST, SOAP, and other API’s easily. They offer an open-source version and a paid version with enhanced functionality.

If you are focused mostly on API test automation rather than exploration, soapUI is the perfect choice for you.

REST-Assured is an open-source Java library that provides a domain-specific language (DSL) for writing powerful, maintainable tests for RESTful APIs. It acts like a headless Client to access REST services. Also, it enables us to test a wide variety of Request combinations and validate the HTTP Responses received from the server.

If you are looking for an API testing tool that supports a BDD style specification and you are using Java, Rest-Assured is a great choice.

TestProject is a comprehensive end-to-end test automation tool that supports Web, Mobile, and API testing. It is a cloud-based, community-powered test automation platform. TestProject’s distributed architecture allows users to collaborate, share, and execute tests with ease from everywhere & without much effort. With the help of an Addon it provides support for REST API testing. It supports REST request types (GET, POST, PUT, DELETE, PATCH) and parameterization functionalities.

If your requirement is to have a single tool for API, web, and mobile apps which is easy to use & set up, then TestProject is a perfect choice.

Karate is an open-source tool for API testing. It is based on a cucumber library, and it helps to create API-based BDD tests easily without requiring step definitions. Those definitions are created by KarateDSL to help users to perform API testing quickly. Karate is a unified framework for API test automation, mocks, performance testing, and even UI automation.

If you are a fan of BDD style specification and are looking for an API testing tool that is equally powerful for newbies and experienced users, Karate is a great choice.

JMeter is primarily built as an open-source Load Testing tool, but it is a great tool to support functional API tests as well. Since API load tests are basically a bunch of functional tests running in parallel, it comes with a lot of functionalities to support API testing.

If your testing demands that your API functional tests that can be leveraged into performance tests as well, JMeter is a no brainer.

Tricentis Tosca is a continuous testing platform for Agile and DevOps. It can cover a wide variety of applications including Desktop, Web, Mobile, as well as APIs. It is the Gartner leader in Test Automation.

If you work for an enterprise and you want to build robust API tests across a wide variety of protocols, we recommend Tricentis Tosca.

Assertible is an API testing tool that concentrates not only on pre-production but also post-production testing. It’s used to continuously test and monitor API’s and websites. Assertible helps you prevent bug leakage to production by creating automated API tests, scheduling them to run across various environments, and alerting users through various channels.

If you are using Github and want to automatically monitor and test APIs and web services after every deployment, Assertible is a perfect choice.

Swagger allows users to start their functional, security, and performance testing right from the Open API Specifications. It enables development across the entire API lifecycle, from design and documentation, to test and deployment. Swagger tooling and ready API platform make it easy to quickly create, manage, and execute API tests in the pipeline.

If your requirement is to visualize, document, and interact with the API resources, then Swagger is the clear choice for you.

API Fortress is a continuous testing platform for APIs. Targets REST and SOAP APIs are considered as the most powerful monitoring tool for the two.

If your requirement is to have a comprehensive tool to not only functionally test but also monitor and load test API’s, API Fortress has you covered.

The choice of which tools to include in the top 10 list was very tough. They are many exciting tools we considered and would like to mention:

Each candidate listed above has its own pros and cons and when it comes to API testing tool selection, many times, the wealth of choices can make it difficult to select which tool to get started with. Selecting the right API testing tool is never easy, but here some tips to keep in mind to simplify the process include:

Below, I have summarized some of the key points of our API testing tool comparison in a mindmap: 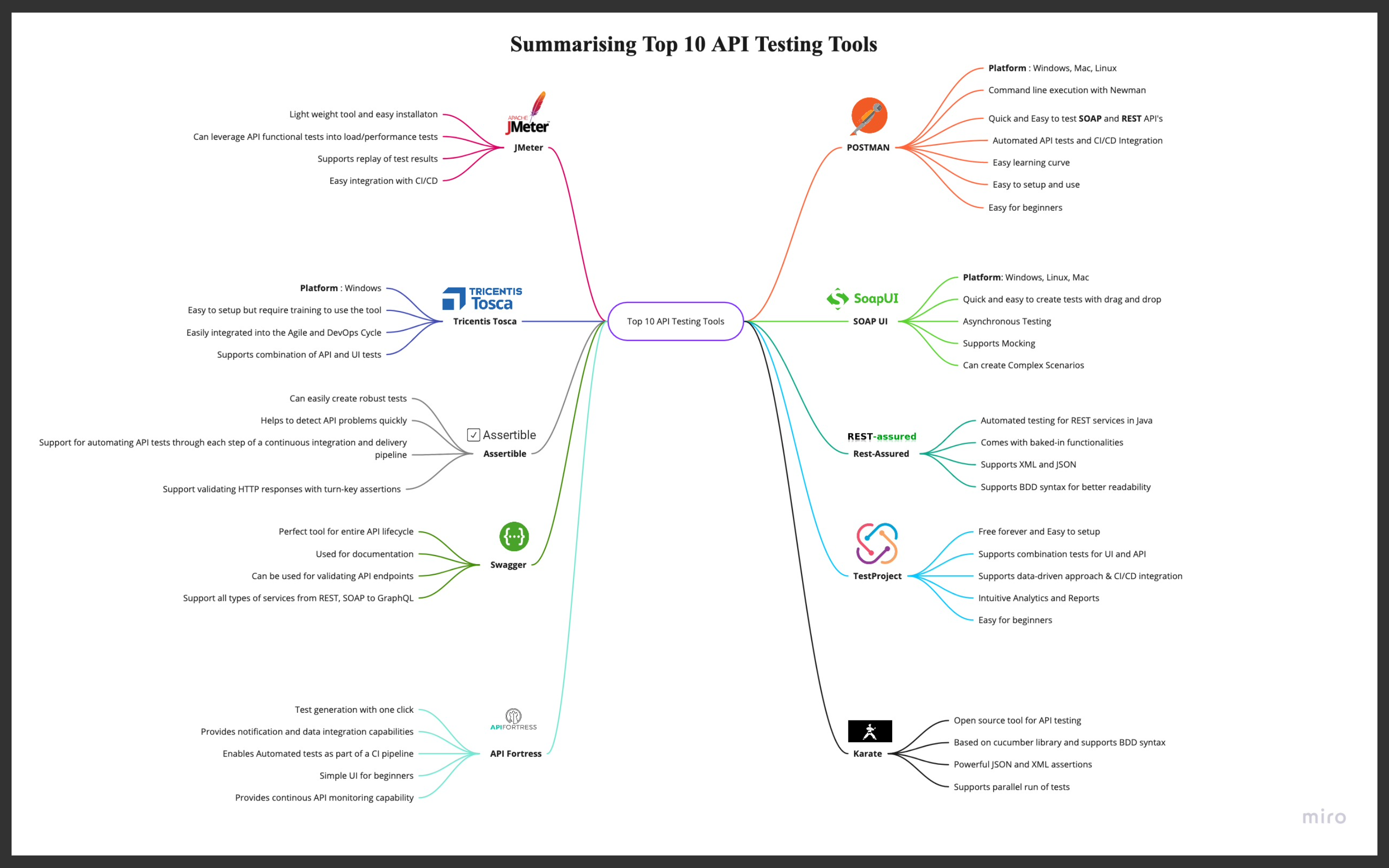 Also, please share your thoughts & experiences with the API testing tools we discussed above. I would be glad to hear from you as my personal experience is limited with some of these tools. Let’s join our opinions together to provide the most comprehensive comparison we can!

That’s all for now, have fun exploring the landscape and sharing new API testing tools and experiences!!😊