*By completing the steps below, you’ll be able to also write the functionality in Selenium, Appium, Winium or any code library supporting automation testing.

1. Identify Page Elements (text fields, buttons, link etc.) and configure them in a certain class, in which you can implement functions that will perform several operations. For example: inserting text and clicking on a button by identifying the element beforehand – which is called Page Object.

2. Write a mechanism that will be activated when a test fails.

3. Write another mechanism to return the page to a certain point (for example: the main page) in order to create independent tests.

5. Add to the reports screenshots and recordings when tests fail.

6. Implement the project in a way that will allow reading all parameters from external configuration files (for example: the location to save the reports).

7. Incorporate Visual Testing for image comparison to test if the site looks as it is supposed to (for example: if a field moved by 6 pixels to the right, the test will fail).

9. Write log files to save information for the developers which will also include stack trace and other details from the exceptions, which will show up in case of a failed test.

10. Object Repository – implement also a central place in which you’ll identify all of the elements’ properties in the application.

11. Connect the system’s database to execute queries and draw information (Despite not having access to the application’s database, we can easily create a simulation for a portfolio).

15. Connection to external libraries (for example: interface cloud services API such as YouTube)
16. Create support for scheduling execution and interface CI systems (it’s possible to install Jenkins CI server on the computer and working with it).

18. Expand to a compatibility with Desktop Apps.

19. The test automation infrastructure should be written according to known Design Patterns, Clean Code methods, coding conventions that must be configured at the design level.

20. Finally, documentation of the entire procedure from A to Z.
The list clearly shows how Selenium is a very small component of the automation testing project.

My rule of thumb is – if our test automation infrastructure consists of more than 20% Selenium code, then we did it wrong!

In order to demonstrate this practice, the following diagram presents the components of a test automation project: 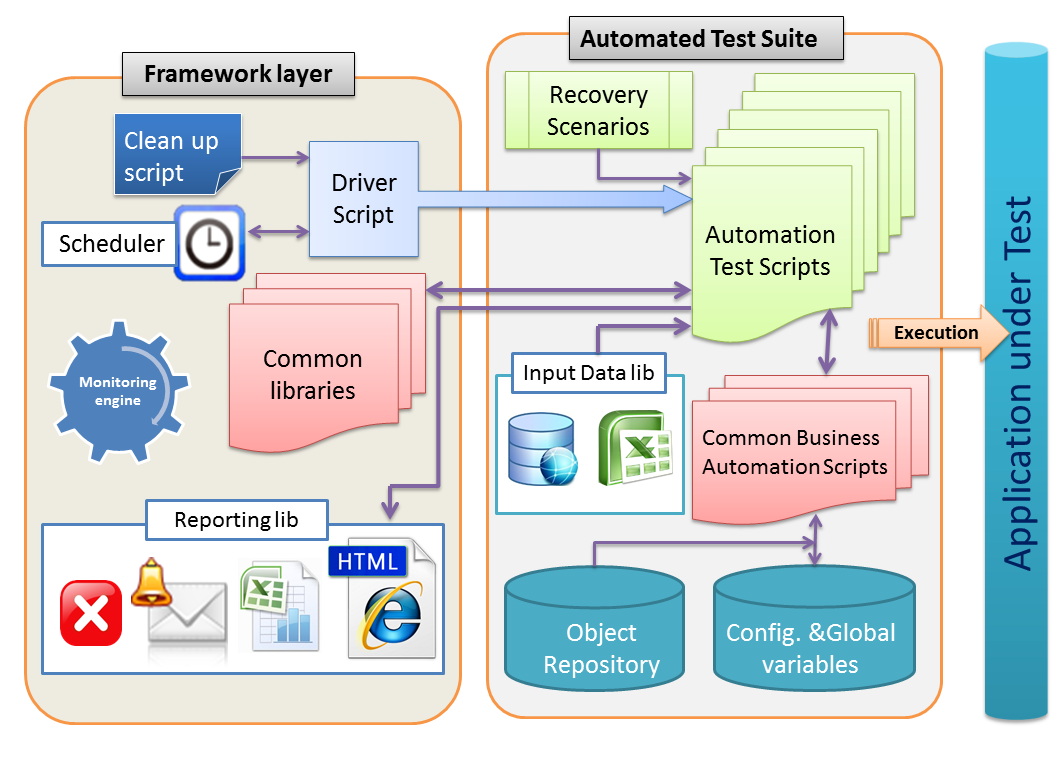 *Notice the execution arrow that connects the automation project and the Application Under Test, this small arrow (and only this arrow) is Selenium.

Please comment, your thoughts, advice and how you turn your automation testing project to be successful  🙂