Software is made of hundreds of small components, each classified as a unit. Many times, due to time to market pressures, and in order to stay ahead of their competitors, testers ignore unit testing and focus on core functionality and UI/UX testing. This stops many bugs from coming to the surface, which in turn can cause serious damage to the product and the brand ❌

What Is Unit Testing And Why Is It A Must?

While the software is still under development, each completed unit is separated and tested to identify if it has any defects. If found, they are fixed then and there. Many times it involves only the QA, but sometimes the developer of the unit also takes part in the process.

This helps them understand the undesired behavior faster. They fix it quickly, and after retesting the bug no longer exists. Thus, we ensure that all building blocks or units are well tested before we connect them and perform integration or other functional tests. A unit can be a method, function, procedure, module, or a test class.

Developers are developers. They are very busy with coding aspects that they sometimes forget the fundamental principle of “testing early” and its benefits. If any bug is unearthed, they tend to fix it at the end, when the whole system is built.

A small bug found can become a huge flaw after all the integrations are done. If the testing, bug finding, and fixing can be shifted left, then the quality gets introduced at a very early phase in the system. Then the bugs can be found faster and the cost of fixing them is lower 💪

How To Do A “Better” Unit Testing

Unit testing itself has two approaches to perform it well:

In the manual approach, the QA engineers try to perform basic testing where they input the test data into the unit and then observe its behavior 👀 If the behavior is within the accepted range, then the test passes. Otherwise, it is failed. This testing also falls under the “black box testing” of a unit.

Or, they input the test data and then watch it transforming at each step of the code, thus looking at the code itself. This is called the “white box testing” approach. There is a third manual approach which is the “gray box testing” where the entire test suite and methods get executed. Out of three, the “white box” approach is the preferred way when performing unit testing manually.

The automation approach is more advanced and also preferred by the developers. Since the code is already written and the code itself is the System under Test (SUT), developers and automation testers find it simpler to create automation suites using the same code.

The developers write a piece of extra code within the system to test a function. Once it works fine, it can be commented or removed before deployments. The code can be moved out and put inside a unit test framework to test all its branches and dependencies. This helps in performing the following coverages of the unit and subsequent integration system:

There are several unit testing frameworks on the market, free as well as licensed. Most are C and Java-based, but modern tools cater to all popular languages ✅ The following pictogram shows the popular tools: 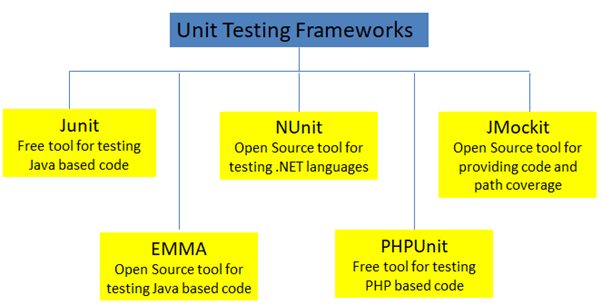 Unit testing is a must-have. We have seen various advantages, mainly early detection of issues that can potentially increase to larger issues as the system grows in size. However, due to quick time to market pressures, teams often ignore it, and just check end-to-end scenarios or other types of functional testing. We should avoid this practice and introduce unit tests in our daily work processes 💠