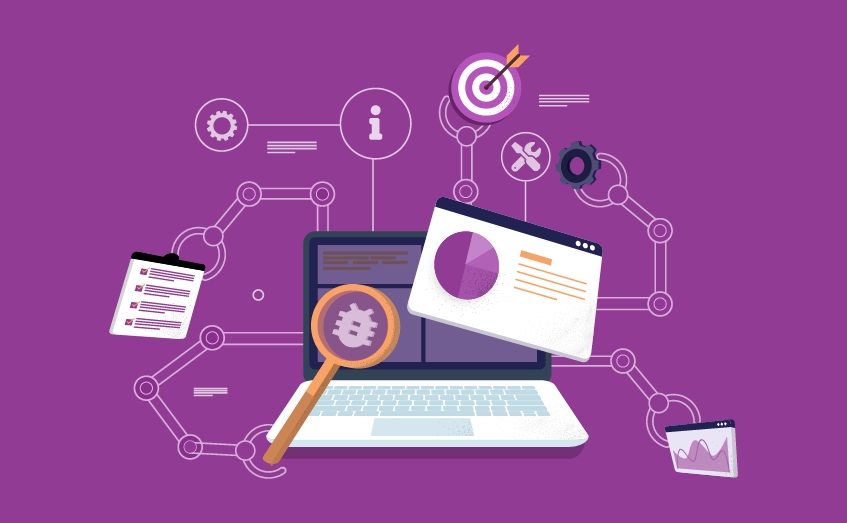 Test automation is specialized testing software that allows software engineers to run tests faster with less propensity for errors. It reduces the number of human hours required to execute tests with the adoption of machine learning 👩‍💻

Test automation practices are also rapidly evolving. For quite some time, regression testing and functional testing have been delegated to automation software to save time, letting you deal with the qualitative crunch work.

Test automation is already used by many teams in agile organizations. It can improve the team and individual workplace productivity, but it must be properly utilized to achieve the most outstanding results.

One of the latest trends of test automation is the use of artificial intelligence. AI technology is the future of it because it can augment human testers by replacing unnecessary repetitive jobs with intelligent tools 🔨

AI can analyse enormous amounts of data quickly and thoroughly with the use of machine learning. While traditional automation tools require engineers to meticulously define all tests before they’re automated, AI-powered tools can automatically discover new patterns in test data that were previously undetected.

How can AI be used in test automation?

AI won’t replace automation engineers at this time, but it will provide them with test data that will improve the accuracy of their testing techniques. Here are some examples:

AI-powered tools can support QA support departments in analysing hundreds of APIs. This allows testers to focus more on extending their toolsets by adding new tests and fixing old ones, instead of going through each process one at a time, which is time-consuming ⏳

A notable test case is the implementation of functional testing of mobile and web applications. Functional testing, where a tester feeds in input and analyzes the output regardless of the internal structure, determines whether software fulfills planned specifications.

It’s commonly regarded as tedious and time-consuming, which is excellent grounds for AI and machine learning algorithms to thrive in.

Artificial intelligence can also serve as a visual element validation tool to ensure that UI interfaces appear correctly to users. AI helps in this aspect by verifying that each element of the UI, such as the proper shape, position, size, or color, matches corresponding predetermined standards.

AI can even go beyond the naked human eye and find differences that human testers may miss, such as a slightly off-the-mark pixel positioning or a mismatch in a color’s hex code.

Another notable trend in test automation is the rise of cloud-based tools. This latest infrastructure helps expand testing coverage by sharing data and resources across multiple computing devices without requiring administration effort 💪

One of the main benefits of cloud-based testing is that it helps distribute resources across teams more efficiently, which improves the collaboration process across teams.

It stores and secures sensitive data within its architecture without needing to scale up on physical firmware. It also improves efficiency by keeping regular backups of data, which reduces the time needed for retrieval.

In the context of automation testing, cloud-based test automation involves third-party cloud applications that provide their own infrastructure to execute tests. These tests are assessments for websites on their security, reliability, performance, and scalability.

This is performed without the constraints of physical restraints, costs per test, geographical limitations, and budget factors.

On top of that, the benefits of using cloud-based services carry over to cloud test automation as well, namely, improved turnaround times and the added ability for testing to be performed across multiple devices.

Each year, new technologies emerge and alter the dynamic business landscape. According to Emergent Research and Intuit, about 80% of American small businesses deployed cloud computing in 2020 📈

It’s no secret. The rise of cloud-based solutions reflects the need for organizations to stay current with these technologies to not fall behind and stagnate in an ever-growing market.

For organizations that deal with test automation, this pivot to cloud-based technology remains true. The most significant reason for this is that a cloud-based test grid allows developers and quality analysts to run multiple tests in parallel, significantly cutting human hours.

With cloud-based infrastructure, there’s virtually no limit to how much you can execute, and run tests. This applies throughout every stage of the software development cycle, improving the quality and efficiency of output delivery for each stage.

What are the benefits of cloud-based testing?

Test automation tools in on-premise testing locations and cloud-based locations exist along vastly different strata. People aren’t making the switch just because cloud-based is merely a novel product. It has legitimate features that make it stand out compared to on-prem testing 💡 Here are its benefits:

📌 If you are looking for a free test automation tool that has both on-prem & cloud options, TestProject might be a good fit for you. Check out this guide for more info.

Suffice to say, adopting cloud testing comes with its own set of benefits. Whether you’re running a startup or a business with existing infrastructure, these cloud-based applications can offer so much to improve the way your business is run.

We’ve only scratched the surface of why cloud test automation is increasing in popularity. But with the rate at which it’s evolving, its magnitude is nothing to scoff at.

Whether you’re on the fence about adopting cloud technology or a full-on proponent for it, it’s no mystery that cloud-based test automation is changing the way businesses work.

It’s not just about minor QA improvements- its impact reaches into every sector of the business cycle, from development to management to marketing.

We can expect organizations to continue making strides in their cloud technology usage. As more companies make the switch, it will make businesses more efficient, productive, and competitive in the global marketplace 🌐