Today’s generation testers are more SDETs (a.k.a. “Software Development Engineer in Test”) – Java, Python & C# programmers. They are good in programming skills but not in testing and quality concepts. Companies also want SDETs who can simply write code. Hence, they compromise on the quality of the product and the art of testing. They no longer focus on the functional concepts and only concentrate on matters such as programming code, automation concepts, algorithms, and code complexities. SDETs are missing the core skill of testing such as test conditions and levels of test coverage due to the fact that the automation code is not useful and fails in many places ❌

A true tester is a person who can understand the business requirements, get clarity on requirements ambiguity, create E2E scenarios that intent to find flaws in the system, create test design with positive/negative validation and find quality bugs. But most importantly, a tester should think like a customer or an end-user. He/she ensures that the test design principles are followed, maximum test coverage is achieved, gives strong domain knowledge and E2E SIT (system integration testing) skills. A ‘True Tester’ is a manual or a functional tester who identifies the scope that can be automated.

How to reduce the gap

In the fast-changing IT and digital market, transforming QA testing by combining manual & codeless automation seems to be a promising future. Manual QA involves manual test designing and validation activities. The same person can also do the automation testing as coding knowledge is not required, you only need domain expertise and functional skills. QA can achieve more automation test coverage with the mindset of a manual tester. Hence reduce the gap between Manual QA & SDET.

📍 Although codeless automation has many great advantages, there are a couple of misconceptions that cause its “bad rep”. I recommend exploring more about it in Andreea Draniceanu‘s great article: Codeless Automation Testing Misconceptions and Benefits. 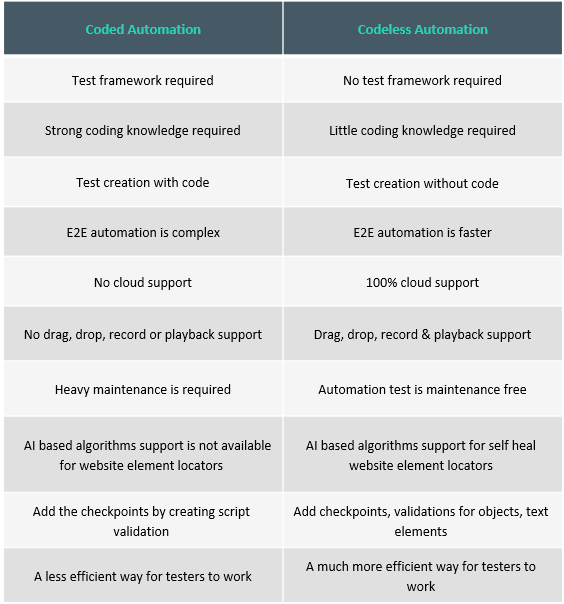 A tester can start test automation as soon as the UI design is completed, without wasting time on test scripting of complex scenarios. This makes it easy to match the development life cycle with continuous integration.

A codeless automation tool is reliable & robust, it works on a record-play principle and it integrates with bug tracking & test management tools and AI-powered features. It’s also cost-effective and has zero code maintenance and cloud infrastructure support. It’s the best solution for faster release cycles for agile & DevOps.