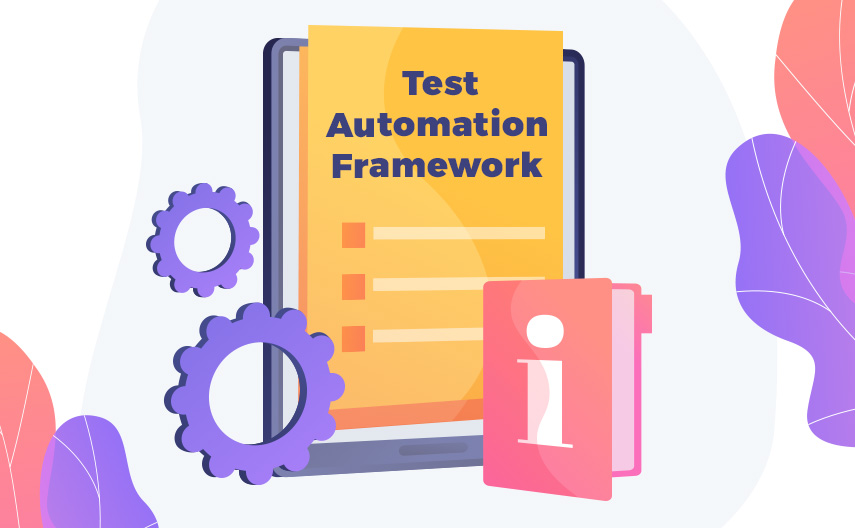 The most difficult moment for a Quality Assurance Engineer is to choose what to use to automate tests. There are lots of tools and frameworks, and both for beginners and for advanced QAs that are not used to start things from scratch, it is not so easy to select the best path to follow.

Here you have everything you need to know to start in the test automation world. Let’s go? 🏃‍♂️

Table of Contents – A Complete Guide to Test Automation Framework

In the context of software quality, one of the most interesting, most desired, and well-known area is test automation. Automating tests is the possibility of re-running tests several times, at several moments, with higher speed and can be triggered automatically, with low human intervention. Automation decreases the need for manual testing and makes it much easier to validate that the behaviors that previously worked continue working correctly.

Creating automated test scripts is creating scripts that automatically reproduce human actions in your application. Automating tests is usually more expensive in the beginning when you have to create the initial structure. Even though the cost of automating a test is always higher than running it manually, the ROI of an automated test comes over time, as we run this test multiple times. This is the magic of automated testing! 🧙‍♂️

What is a Test Automation Framework?

There are some definitions explaining what a test automation framework is.

“A tool that provides an environment for test automation. It usually includes a test harness and test libraries. “ – ISTQB Syllabus

“A test automation framework is essentially a set of guidelines for creating and designing test cases. It is a conceptual part of automated testing that helps testers to use resources more efficiently.” – Techopedia

“A test automation framework is an integrated system that sets the rules of automation of a specific product. This system integrates the function libraries, test data sources, object details, and various reusable modules. These components act as small building blocks which need to be assembled to represent a business process. The framework provides the basis of test automation and simplifies the automation effort.” – Wikipedia

Summarizing these definitions, we can say that a test automation framework is a complete set of various tools, guidelines, protocols, rules, coding standards, best practices, processes, resources, and mechanisms to support automation testing 🤗

They are not mandatory but recommended. Following a test automation framework when automating tests for an application will provide a lot of benefits and effective results for the product quality.

The Purpose of a Test Automation Framework

However, why we have to use a lot of this stuff instead of being free to do what we want? The main purpose of a test automation framework is to take advantage of stuff that is being effectively used by companies around the world, and not reinvent the wheel.

When we decide to use a test automation framework, we aim to:

The benefits of Test Automation Framework and why use it 💡

There are a lot of benefits when using a test automation framework. Most of them are well-known benefits but it is good to review them in order to increase your knowledge and your convincing power before adopting it.

Using a known test automation framework will make it easier to implement test automation given that it already provides everything you need to start automating your application’s tests. This will make it possible for you to reach high-quality levels for the product more quickly, which lowers the TTM. Also, as you automate testing, you will be able to deliver system versions faster in the future, again lowering the TTM.

Best use of testing resources

Instead of QAs running tests manually, which creates a daily capacity limit, QAs can automate tests that once created can be run automatically. In addition, it is possible to better use the company’s computational infrastructure to run tests automatically, achieving a greater number of runs on the same infrastructure than a QA could manually do. This brings a reduction in infrastructure costs for the company.

Once you have automated your tests, you can run them at different times throughout the software development cycle 🔁 It will be possible to run a test suite on a particular feature during its development, given that the tests are already ready and can be run by the developer himself, something that would be impossible to do manually.

As the number of manual tests you have to run decreases, more automated tests can be built because you have more available time. With this, you will be able to increase the test coverage of the application. Increasing application testing coverage is critical and essential to increasing product quality over time. The more automated tests you build, the more time you have to build new ones.

With automated tests we can run more tests in less time, we can run the same test suite more times, we can run more tests in each test cycle. All of this is possible due to the high speed provided by the execution of automated tests, which increases the volume of executions and the number of executed tests during the software development cycle, as well as throughout several sprints of the project.

Another major focus of a test automation framework is code reuse. Once a test is automated and you have the need to run a similar scenario in another application, you can at least reuse the test structure in this new context, and in some cases, it is possible to reuse almost the entire script created. The possibility of code reuse is an amazing thing provided by the existent test automation frameworks 🤗

Choosing a tool, and following all the guidelines, protocols, rules, code standards, best practices, processes, resources, and mechanisms, that are applied to your context, will provide an organized, efficient, and effective test automation, placing the product on a high level since the beginning, from the quality point of view. 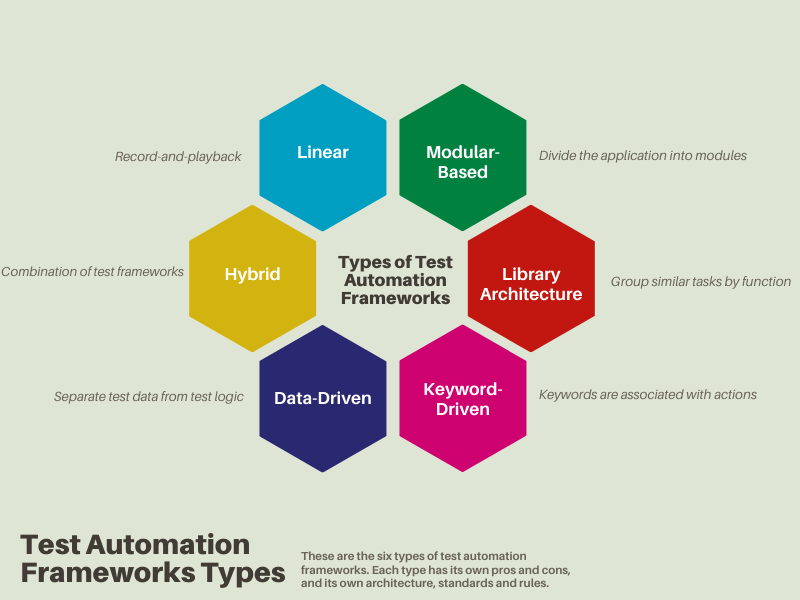 A Modular-Based testing framework is a framework that divides the application into modules that will initially be tested in isolation. Test scripts that will test only a certain module without depending on others are created. In sequence, some scripts can be combined to validate broader portions of the application, validating the integration between modules. Maintenance is much simpler in a Modular-Based testing framework because in case of changes, only the scripts of a specific module need to be adjusted and not all the test scripts.

Library Architecture testing framework makes similar tasks to be identified within scripts and become library functions. This framework is based on Modular-Based testing framework but with improvements. It is very suitable when you have similar functionality throughout the application.

A Data-Driven testing framework isolates the logic of a test script from the test data. It is very suitable when you need to test the same scenario, varying only the input data and the result. For this testing framework, it is necessary to create a standard mechanism for reading the data that is stored outside the test code, in a database, text files, spreadsheets, csv files, etc. 📂

A Keyword-Driven testing framework uses keywords to build test scripts. A keyword contains a set of necessary steps to be performed in the application. The steps vs keywords mapping is stored externally for easy reuse.

How to choose a Test Automation Framework

One of the most difficult things is to decide which test automation framework to choose. You can follow the next steps to better decide which one you will start to use:

If after the analysis performed through these steps you have more than one option, it is worth doing a proof of concept with the options, and then, compare how was this initial contact with each framework to notice more advantages, more disadvantages, and then make a better choice ❗

What are the steps for a powerful test automation approach?

Most people want to start automating tests just by opening an IDE and starting to code. However, many steps should be taken beforehand to ensure better planning and better implementation of test automation inside a company.

Following these 10 steps will guarantee a better start and the start on the right path, as well as will provide good results right from the start, with no regrets and losses for the organization.

These steps are described and explained in depth below. 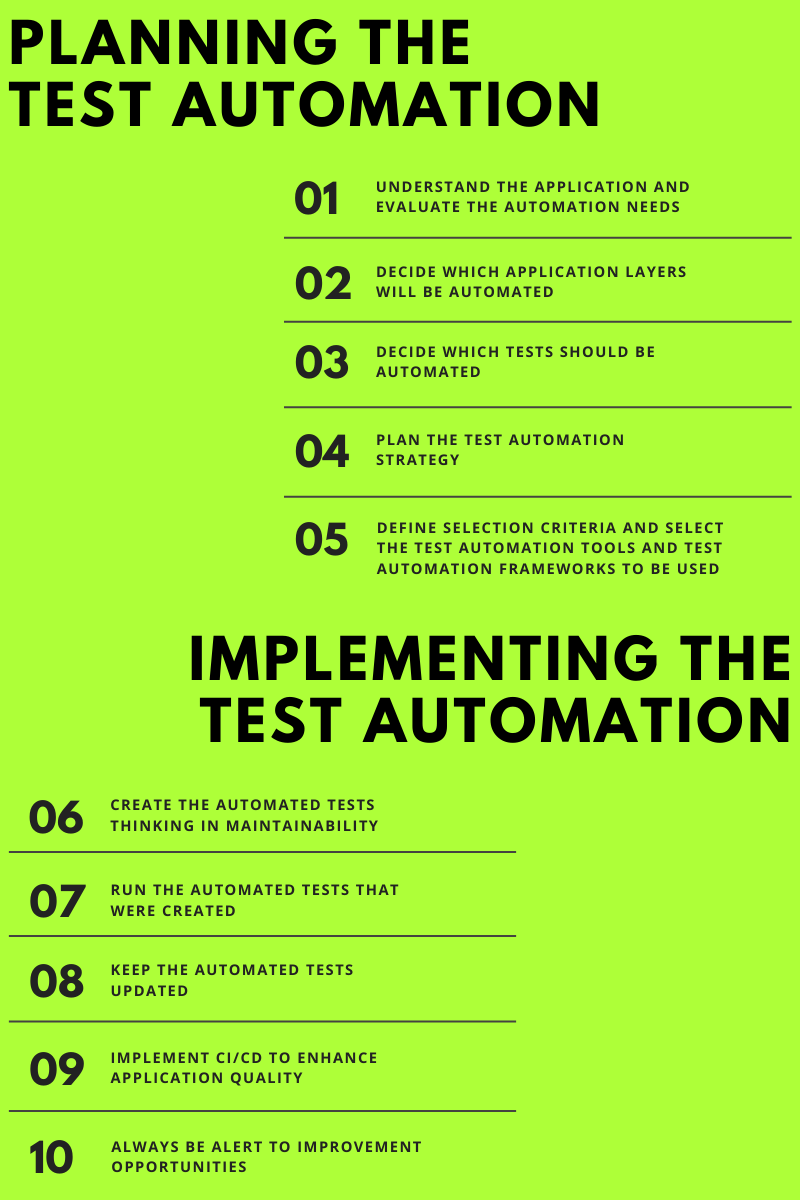 Firstly, you have to plan. Understanding the application, it is important to know the requirements and evaluate the automation needs. Then, you can decide if you will automate unit tests, backend tests, frontend tests, or mobile tests. It is extremely necessary to define which application layers will be automated.

After that, you have to plan which tests should be automated given that it is impossible to automate everything. Focus is important at this moment. Then you should plan the test automation strategy to not lost time and start the wrong way.

In the second phase, you have planned how to implement the test automation. Now it is time to implement it. You should start creating the automated tests thinking in maintainability, this is an important thing to focus on to not have problems in the future. Remember that the costliest part of test automation is the start and the maintenance.

After creating, you can run the automated tests that were created in a constant frequency. In this step, you will start to notice the great benefits of test automation when the ROI grows. Remember to keep the automated tests updated, nothing worse than an outdated test suite, when all the time you need to step in manually to determine if a failure is in the application or in the test code 👨‍💻

Implementing CI/CD to enhance application quality is a way to improve the chance to anticipate failures and have the best use of the test automation, when tests can be automatically triggered in specific steps of the software development cycle.

Finally, do not forget to be always aware of improvement opportunities in all the processes, tools, guidelines, and frameworks. You can always have better results 😀

We made a deep dive into the existing types of test automation frameworks and the advantages and disadvantages of each one. We also learned the steps we should follow when choosing one.

Finally, I indicated 5 steps that must be followed and 5 that should be followed, in order to effectively plan your test automation implementation.