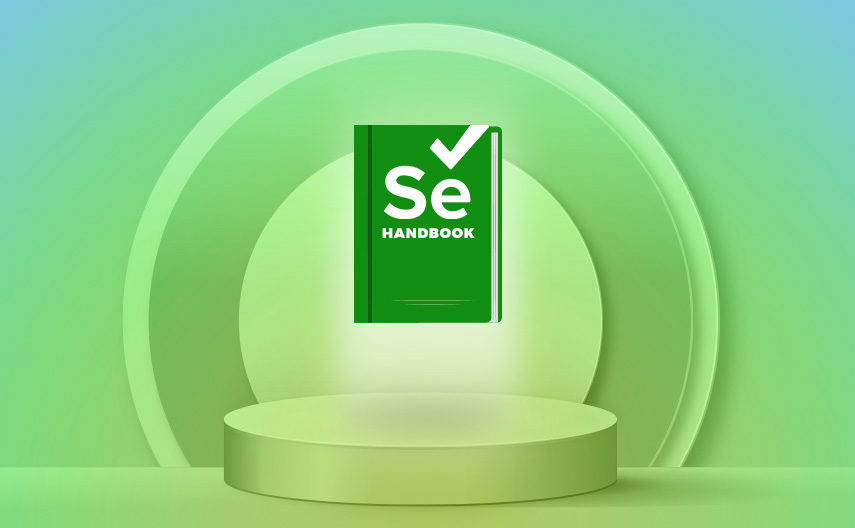 The Selenium Handbook is a reference to understanding Selenium. By the end, you will know how to locate elements on a web page and create your own test scripts. Plus read about new Selenium 4 features such as the Relative Locators and Chrome DevTools Protocol.

Table of Contents – The Selenium Handbook

Selenium WebDriver is a reliable API for automating our browser through a driver. That’s great because most applications are web-based and designed to run on browsers.

In addition to Selenium WebDriver, the Selenium family also consist of Selenium IDE and Selenium Grid.

The Selenium family of products caters to a person who is comfortable with writing or recording their test. We can record our test using Selenium IDE then execute our scripts employing Selenium WebDriver and scale up applying Selenium Grid.

Before Selenium 4, Selenium IDE was only available for Firefox. Now, it’s available as a Firefox and Chrome extension. It has a lot of new features which include the use of plugins. We can extend Selenium IDE to introduce new commands or integrate with a 3rd Party. The following links provide screenshots and examples about more Selenium IDE features:

How To Install Selenium

There is more than 1 way to install Selenium WebDriver. Some engineers go to Selenium’s Official Site or Maven’s Repository. If you want the previous and latest releases for each component, then use Selenium’s Official Site. However, Maven’s Repository has many plugins, project jars, library jars, and artifacts. Detailed instructions for installing Selenium are provided from the following links. 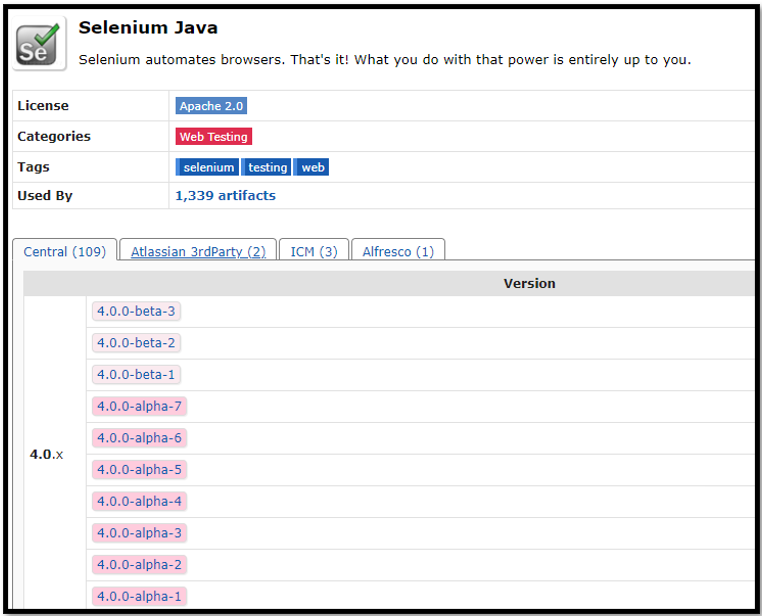 Selenium WebDriver has 8 locator types to help find a WebElement. In alphabetical order, the 8 locators are

Each Selenium Locator requires a value to find a WebElement. Here’s a screenshot of the 8 locator types. 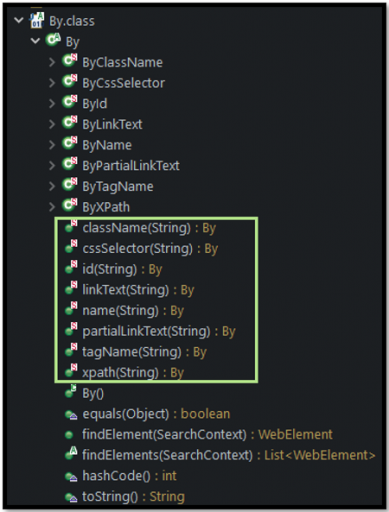 Browser Methods are a group of methods that perform actions on a browser. In alphabetical order, the following links explain each Browser Method. 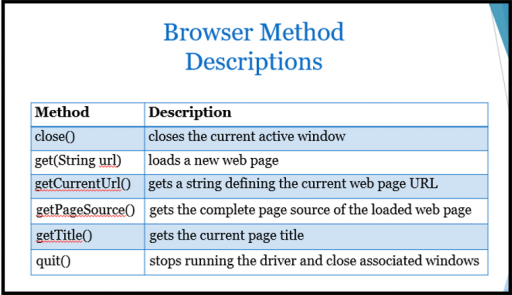 A WebElement is sometimes called an element. It symbolizes an HTML element within an HTML document. Buttons, links, and images are examples of a WebElement. Therefore, the WebElement Method category performs an action on elements. In alphabetical order, the following are 16 Selenium WebElement Methods that carry out actions on the web page. Each link has a description, screenshot, and/or source code to explain the WebElement Method: 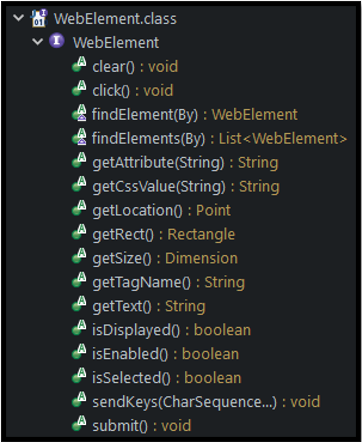 The Selenium Navigation Methods are a collection of methods that loads a web page, refreshes a web page, moves backward, and moves forward in our browser’s history. Each Navigation method becomes available after writing navigate() then the dot operator. Writing navigate() allows the driver to access our browser’s history. The following links have code snippets and explain each Selenium Navigation Method: 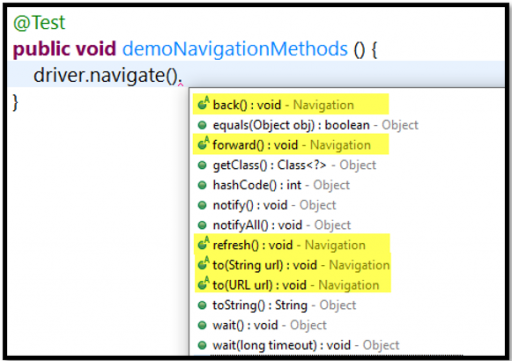 The Selenium Wait Methods are a group of dynamic methods that pause execution between statements. Two common errors occur when executing the next statement:

The following links have code snippets and screenshots to describe each Selenium Wait Method: 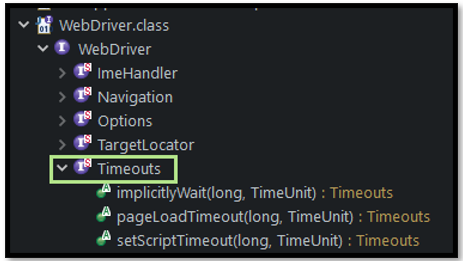 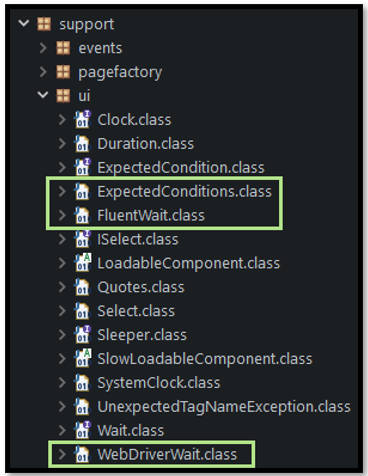 The Selenium Switch Methods must switch before performing an action within the frame, alert, or window. Our program returns an exception if we forget to switch. Methods for switching are accessed through switchTo(). switchTo() returns a target locator and used for sending a future command. The following links provide a description and code snippets for 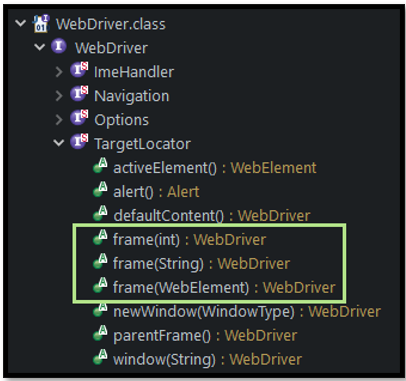 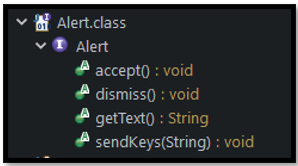 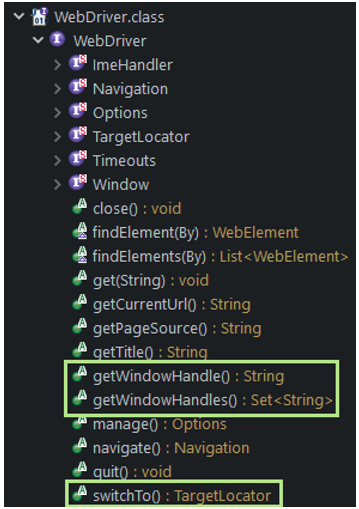 Advanced Actions in Selenium handle keyboard and mouse interactions. However, there is a difference between Action and Actions. Both are members of Selenium’s interaction package. 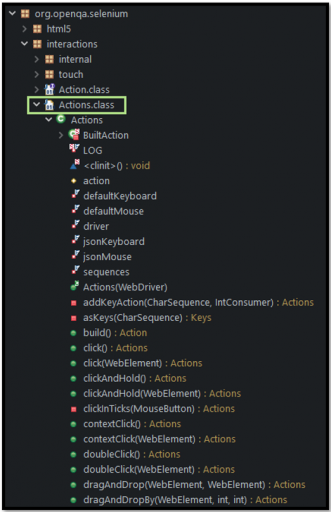 In addition to taking a screenshot, Selenium offers a way to open a window/tab then automatically switching to that window/tab. The following links provide code snippets and screenshots to handle a new window/tab and capture screenshots.

The purpose of Relative Locators is to locate a specific element depending on the position of a different element. Selenium supplies 5 overloaded methods with an option of 2 parameters (By locator & WebElement element). The 5 methods are 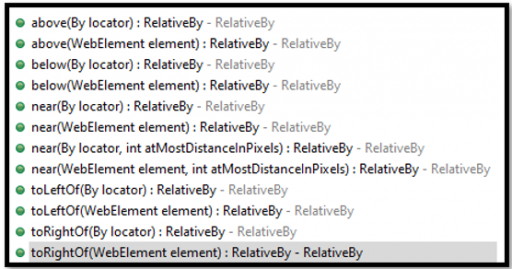 When it comes to Selenium, the ChromiumDriver class has a lot of methods but 2 methods allow us to control Developer Tools in Chrome and Edge. 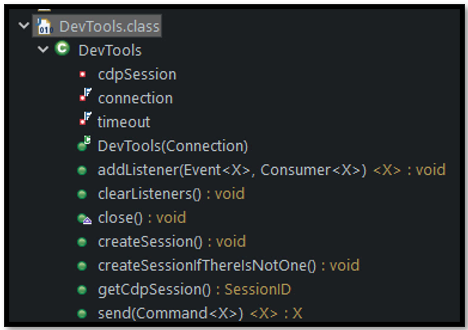 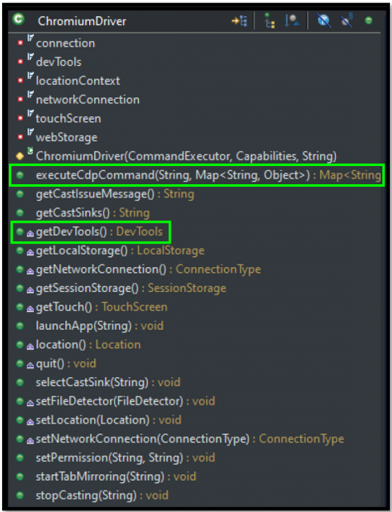 Selenium Grid is used to carry out testing processes on several browsers (Chrome, Firefox, Edge, etc.) and operating systems (Windows, MAC, Linux) using different machines. It allows the execution of Selenium WebDriver scripts on remote machines whether the machines are real or virtual. The commands are routed by the client to remote browser instances.

Selenium’s original Grid was released in 2011. Since then, technologies such as Docker and Kubernetes have made technology more accessible. Therefore, Selenium Grid has been updated to become modern and take advantage of new technology features. In addition to being modern, it’s easier to trace and log what’s going on with a condition. As a result, the debugging session is straightforward with Selenium Grid.

At the heart of Selenium Grid, there is a new architecture that includes 4 processes: router, distributor, session map, and node.

Thanks for reading this Selenium Handbook. For more on Selenium and Automation Tutorials, check out TestProject’s blog.