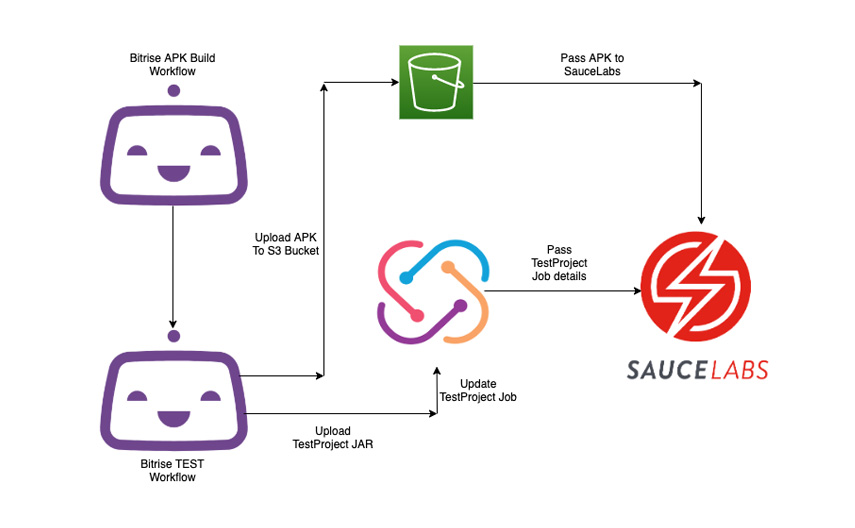 In the advancement of the Agile era, frequent releases and faster feedback have become vital for software teams. To keep this cycle constantly up and running nothing could beat automation, and this necessity leads us to the topic of CI/CD. However, another challenge is performing continuous testing and rectifying major bugs before the application goes to production. In the last few years, we have talked a lot about Test Automation which significantly reduces the testing time by automating repetitive tests by making sure your stable features are untouched due to the integration of new changes. Here is a short overview of this interesting challenge and our CI/CD life before adapting TestProject.

Life Before TestProject – CI/CD with Bitrise

We included our automated tests as part of our CI/CD lifecycle and delivered continuous testing feedback to our team. However, things were getting difficult overtime when it came to managing test infrastructure, device management, and report sharing mechanisms within the team. Some of the solutions which we implemented during our early days of setting test automation pipelines were:

Some of the key use cases which we wanted to cover by introducing TestProject into our automation stack were:

Before you try out any of these APIs please make sure you generate an API key from your TestProject account.

For the execution of your coded test, you need to pass your codebase in the form of a .JAR file. Here we need to use the POST API for uploading .JAR file to the TestProject cloud:

The next thing is to run the tests, but before that, we need to add those tests in a TestProject job, which we managed to complete in two phases:

Get the list of test IDs that need to be added to the particular job. Use the below API that will help you to get your test IDs.

Once you get the Test IDs, you need to add those tests to your TestProject job.

Finally, it’s time we tell TestProject to run our job on Sauce Labs. We will be using the run job API to define our agent (Sauce Labs) ID to run our tests. 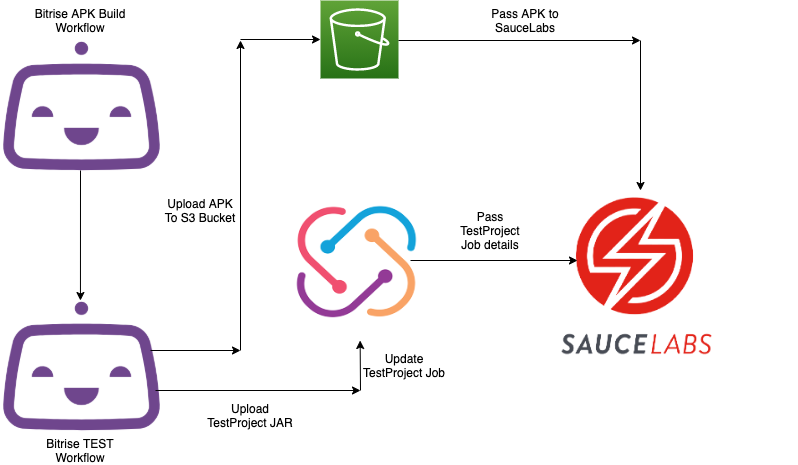 Add TestProject to your CI Pipeline

For the CI platform, we are using Bitrise here as part of our Organization’s adopted CI/CD platform. However, the entire flow is more towards calling APIs at different stages. We can configure something similar to other CI/CD platforms like Jenkins, CircleCI, Buddybuild, etc.

Clone your test automation code base to Bitrise using this step in a folder at run time or you can directly clone into the Bitrise source directory as well.

This step is required because stacks on Bitrise might use JAVA 8 as the default JAVA version. For TestProject OpenSDK to work, we need to switch the JAVA version to 11.

Since we need to upload our coded project in JAR, we will be running another script step using the Gradle command.

We will be calling the POST API to upload the JAR file in the form of a CURL command.

As mentioned earlier, we need to update our job with the test IDs we want to run with that job.

i) Get your Test IDs:

6. Run your Job on SauceLabs

This will be the final step of our workflow, where we will be executing our TestProject job on Sauce Labs. Let’s use another CURL command to run the job.

❗ Important Note: We are uploading our APK to AWS S3 bucket from the build stage of our workflow and configured the S3 bucket path as Appium capability in our code.

Well, that’s how we managed to set up an E2E CI/CD pipeline using TestProject for our mobile tests. Overall my key takeaways from this journey are: