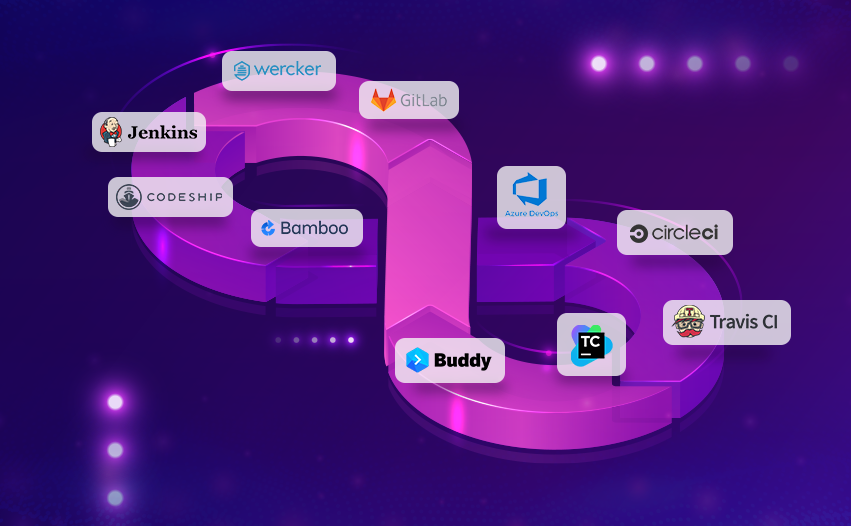 With the changes in the software development life cycles (SDLC), the overall process of deploying the code to the server has also transformed. Previously, we used to test the code manually after pushing it onto the main repository and deployed it after carefully scrutinizing every small detail. This was a cumbersome process and consumed a lot of time which could have been used in other processes.

The result? Fewer releases and a long list of bugs that came during the integration process. Fortunately, things have changed now. Today, we focus greatly on the quick development ideology deploying the changes every week or every fifteen days. This has been made possible by CI/CD or CI/CD practice and the tools that offer this facility.

In this post, we will introduce you the concept of the CI/CD pipeline in brief and present top CI/CD tools available in the market today with their strengths and weaknesses so that you can decide which tool suits you the most.

CI/CD is abbreviated for Continuous Integration (CI) and Continuous Delivery (CD) which is a set of operations in code deployment. CI and CD revolve around three major processes in the development of software: Build, Test and Deploy. Through any of the CI/CD software, a tester or a developer is bound to stumble upon these three terms while creating a pipeline. But it is still unclear what these terms constitute these processes and why they are the talk of the town these days. Since CI/CD is made up of two extremely important terms, let’s understand both of them and how they are connected to each other.

Consider a real-life scenario. There are two developers working on the same project but on different technologies. Three months after starting the project, both of them integrate their code but find out that the integration has too many issues and the codebase is now so big that testing has become a new challenge. Going manually, this might take as long as half the time that they spend on development.

Continuous Integration solves this issue. As the name suggests, continuous integration integrates the code continuously on the existing code. This serves our motive of finding out any issues in the code integration too early into the system and if there are, it is very easy to test smaller patches. For this, obviously, we need a system. A popular version controlling system such as Git serves the issues of integrating the code from multiple developers. This is counted as the primary stage of our pipeline. Once we have pushed the code into the shared repository and integrated it, the next stage comes the continuous delivery.

Continuous Delivery is the next step and as the name suggests, it aims towards continuously delivering the newly integrated code to the end-users. But, we cannot integrate and deploy the code directly. Therefore, after passing the build stage, we test the code on our CI/CD pipeline. These tests are automatic and are run on the newly integrated code as soon as we push it into the shared repository. Once the code is checked and has passed the tests, we can deploy it on to the environment. The environment can be either staging environment or production, depends on the method by which the organization goes.

The CI/CD pipeline process has changed the overall code deployment and made it easier and faster. This has been made possible by the CI/CD tools available today which are in charge of this overall process. In the next section, I will introduce you to top CI/CD tools and the benefits they offer.

Jenkins is a free and open-source software used for continuous integration and continuous delivery. Jenkins is written with Java and comes along with the support for build, test and deploy, it also supports version control systems such as Git and server-based functionalities. Jenkins was released in 2011 and fetches its main power from its huge plugin support.

Bottom Line: Jenkins is a great tool if you are looking for something which is free, is capable of withstanding heavy load and is open source. A great thing about Jenkins is that you can develop your own plugin if you think some feature is lacking. This way, you get a tool that is fully equipped. Obviously this would require knowledge of plugin development but it is worth the effort of changing a tool completely just because of a feature.

Buddy is a CI/CD tool for the developers fond of Git, Bitbucket and GitLab. Developed as a downloadable virtual machine for different operating systems, Buddy moved towards docker based integration and deployment so that it can be used on various Linux servers using docker services with a language and framework of developer’s choice.

Bottom Line: Buddy is best for developers and businesses using docker based systems. Buddy offers flexibility in the Linux machine you choose such as EC2 on Amazon so you don’t need to worry about the virtual environment. One thing to remember is that Buddy is a little pricey and it is definitely not suitable for individuals and small businesses who spend a calculated amount on services.

Azure DevOps is a server service that comes equipped with multiple tools. Out of these tools, Azure Pipelines is the one which takes care of the CI/CD pipeline and helps us develop faster. Azure DevOps is a paid service but with a few dollars, you get a lot of tools just like AWS along with the CI/CD server.

Bottom Line: Azure DevOps is great for testers and developers that want other tools too along with the CI/CD servers. Subscribing to different tools will cost you much higher than going with the Azure DevOps. Although, I recommend not using Azure DevOps as your first ever CI/CD tool. It is better for experienced ones.

Released in 2006, TeamCity is a continuous integration server with build management qualities. TeamCity is available for free use up to 100 build configurations post which the user needs to pay for the services. TeamCity can be integrated with JIRA or Azure DevOps and can be launched on the Kubernetes cluster. You can also use TestProject’s built-in TeamCity integration for a complete E2E automation experience.

Bamboo is a very popular and versatile CI/CD tool by Atlassian with vast community support. Bamboo comes with automatic build-test-deploy functionality in its build server. This helps in creating an automatic continuous delivery pipeline.

Bottom Line: Bamboo is an excellent tool for CI/CD development and I have personally found a lot of people preferring it or switching to it from other tools. Bamboo is developed by Atlassian which means it has good seamless integration power with other Atlassian tools. So, if you are using any of those tools, this could be a great option for you. Bamboo is very versatile and can be used by beginners, freelancers and businesses.

Travis CI is a very popular open-source CI/CD tool. Travis CI makes the synchronization part very easy in committing the code in a shared repository as it detects the pushes immediately. Travis CI then builds the project and runs all the tests immediately.

Bottom Line: Travis CI is a great start for Git lovers and people with open source projects since the plan for open source is free. Travis CI has shown some speed slowdown when the project starts to heap up a bit. Apart from that, integrations raise issues if not working on GitHub and Bitbucket.

CircleCI is a CI/CD tool with good integration facilities and powerful build-up. CircleCI can leverage the docker based deployment to apply the CI/CD pipeline on build-test-deploy stages. CircleCI can also be used for cloud-managed integration and running the private infrastructure firewall. CircleCI is the best tool for multiple projects as it takes out the data from them using the granular checkout key options. CircleCI charges for its services.

Bottom Line: CircleCI is extremely useful and is very popular among the community. Apart from an unstructured user interface and UX which can bug the beginners, CircleCI has good integrations, power to collaborate on the cloud and use docker based projects.

GitLab is a complete set of tools including the CI/CD functionalities. As indicated by its name, GitLab is attached primarily to Git and the way Git works. So, if you are a Git developer and are well versed in its concept, GitLab might be the best tool for you. GitLab allows you to build-test-deploy on docker as well as virtual machines.

Bottom Line: GitLab has been emerging as a powerful CI/CD tool but the only problem is its integration with only Git. If you are not using Git or are not inclined towards using it in the future, GitLab is not the tool for you. Apart from that, for Git users, GitLab is an extremely useful tool and you can always start your projects with GitLab.

CodeShip is an easy to use CI/CD tool that takes care of the heavy work leaving the developers’ work only for the code integration. Codeship is quite popular among the engineers for shedding off the load from developers. Codeship bears the responsibility of workflows making the process automated including the development and deployment of the code.

Bottom Line: Codeship is known for its ability to enhance the CI/CD pipeline and automating the bug-catching phase. Codeship makes the test and deployment feature seamless. With these features, Codeship has been found to be buggy when the project stack keeps on rising. Sometimes Codeship also points out bugs without any actual bugs in the code but just due to some external factors. Therefore, I would recommend it for learning purposes and not switching to it as a business.

Bottom Line: Wercker is extremely popular with the people working on docker based containers and microservices. If you are one of them, I would definitely recommend Wercker to you. Wercker has great integrations and good overall control over the pipeline. The downside is the price. Wercker is not free and if there is not a feature in it, you need to contact the support and the overall process is time consuming.

Which CI/CD Tools Is Best for You?

Now that you have gone through the list of all the CI/CD tools and are overwhelmed with the information, a simple question is which one is the best? 🤯

Honestly, the answer to this question lies within your work. In the above listed top CI/CD tools, no pair among them is equivalent in every aspect. Some might give you more control over automation, some may give control over docker containers, etc.

As far as my experience goes, I find Jenkins pretty helpful in my work but that is because whenever I am using docker containers, I am almost always building projects on AWS. Jenkins gives me the power to create any functionality through its plugin feature which is very crucial. A lot of my peers like other tools and have stuck with them for more than three or four years.

So as I said, it ultimately boils down to the type of project you are building and what your requirements are. I highly recommend going through all the tools and reading the pros and cons carefully. Analyze which pros align perfectly with what you are looking for and start pushing your code into the CI/CD pipeline 💪