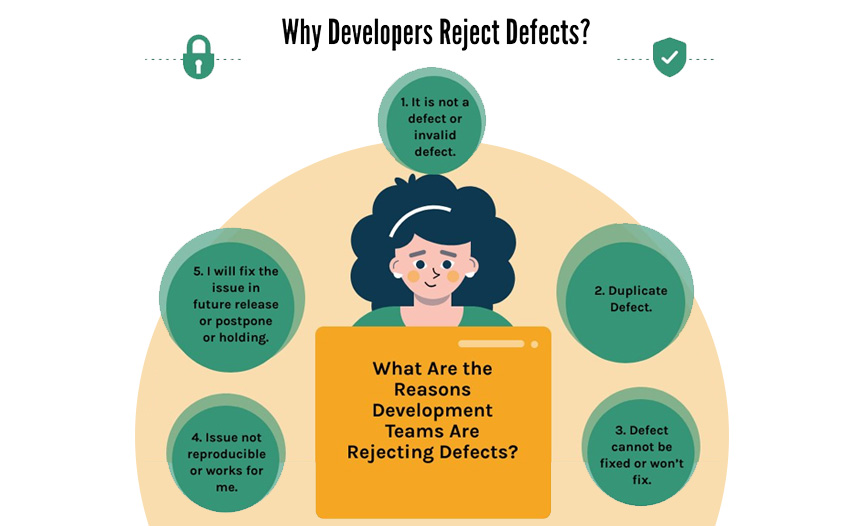 As testers, defect tracking and reporting are key aspects within our role, as it is crucial to communicate such results back to our developers or higher management in order to ensure we release a stable and flawless product. However, we know that a lot of the times when we raise a defect, developers reject it for some reason.

In this article, we shall see what are the reasons developers reject reported bugs and Why? Usually, these are the 5 most common and generalized reasons (as also seen in the diagram below):

1. It is not a defect or it’s an invalid defect

By reviewing the defect report, developers might say the defect is a duplicate defect due to the following reasons:

Developers might say that the defect cannot be fixed or won’t fix. Why?

4. Issue not reproducible or works for me

Developers might tell you that the issue is not reproducible or that it works for them well. That might be due to a build mismatch and/or not enough test data. For example, if the platform/Browser/OS is not mentioned in the defect report, then the developer will try to reproduce it on another platform, and it might just work fine for him. We need to make sure to deliver proper defect reports with all the relevant information for reproducing the defect.

5. I will fix the issue in a future release or postpone or put on hold

There are also scenarios in which developers might say they will fix the issue in a future release, postpone it or put in on hold, due to the following reasons:

These are 5 of the most common reasons I experienced while reporting defects. I would love to hear your thoughts and what reasons have you been getting from your developers?