Modern software development practices require deployment of a well functioning software in production as soon or often as possible. For example, agile methodologies directly enforce this behavior by having teams working on small increments and deploying to production after each sprint (read: Test Automation Strategy in Agile Projects).

Days when the development team would be developing a piece of software for months, then pass it to QA, UAT and all down the line to production, do not longer exist. These days, the emphasis is on having a well-functioning software and never allowing situations which could endanger software quality, such as when essential software changes are introduced at the end of the release cycle. This is where Continuous Integration comes into use.

Who Is Doing CI?

In general, DevOps engineers are usually assigned to setup the CI pipeline. Nowadays, the role of a DevOps engineer is very similar to a test engineer since both ensure process and software quality. I usually say that QA and production is the closest meeting point with the client. In that sense, CI provides very powerful tools for test engineers to enhance overall process and software quality by actively participating in the following areas:

The development team has its own source version control repository where the project exists (nowadays that is usually Github). Stable branch (master) is usually considered as a working branch and development of new features is rarely done directly on the master. Instead, developers create their own branch where developing new features (branch A for feature A). When change is pushed to repository on that particular branch and developers make pull requests, some basic set of tests (smoke tests) should be executed against that branch. From the CI perspective, this usually means the following: 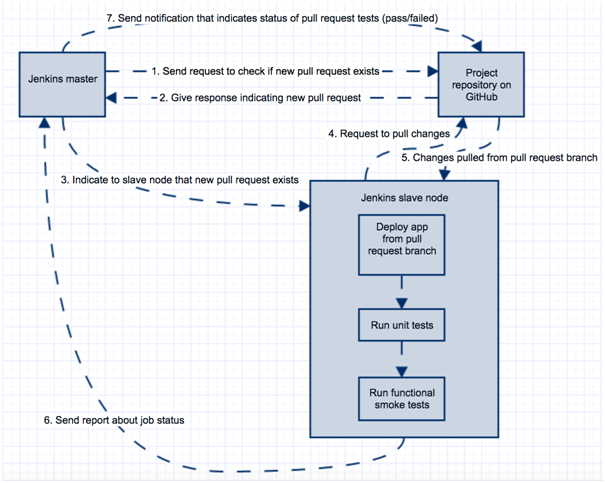 When CI process is completed, from the perspective of test engineers and developers, there are few requirements:

If this passes and new code for feature A is merged on master from CI perspective, the following occurs: 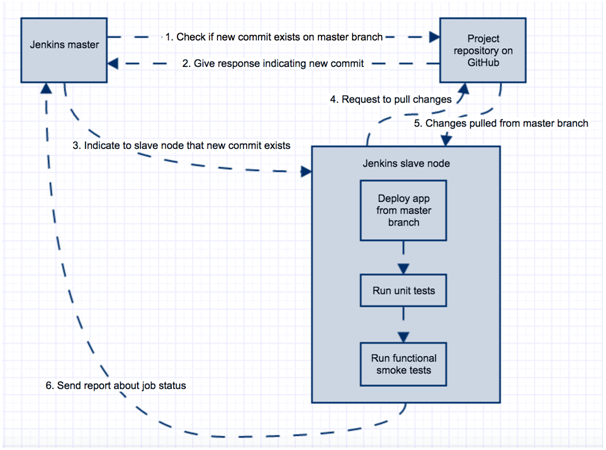 This indicates that the merge was successful, smoke test feature still works and it is now the responsibility of test engineers to re-test feature A once again on master branch (to make sure that the merge did not cause any side effect on feature A). Of course, over time it is a good practice to enhance your test automation suite so that most of the features are covered.

This becomes more and more important in later iterations in the project, when test engineers have more tasks (testing current features as well as all previous features). This is where regression testing becomes handy: from the CI perspective, the execution of regression tests usually happens either when the test engineer explicitly runs regression testing or by using a scheduler (for example: execute regression tests every night). It is a good practice to make this job customized so that we are able to specify against which branch this job will be executed (here you can read more on why and when to perform regression test automation). The procedure can look as follows: 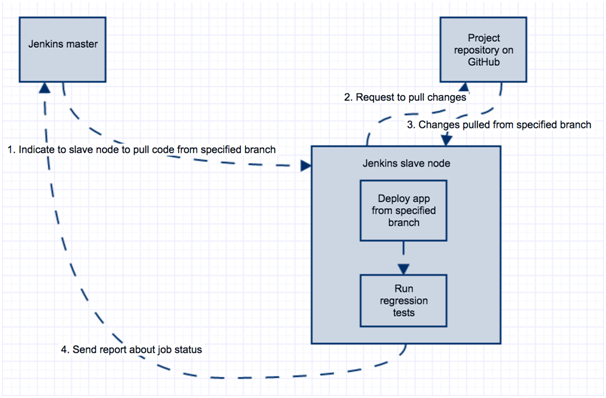 Job – most important “unit” in Jenkins terminology is the job. Job is a single execution unit in Jenkins CI server that must have some outcome (pass/fail). For example: a job can be a deployment job, smoke test job, regression test job, etc. Job consists of multiple areas that are executed in sequential fashion, which will be explained in the next paragraph: Anatomy of Jenkins job.

Plugin – one of the major features of Jenkins test automation is the ability to customize it by either using existing plugins or creating your own. Everything in Jenkins tool, from job configuration parts to Jenkins configuration parts is actually plugin. Since Jenkins’ community is substantial, various Jenkins plugins already exist for the use of the most demanding CI workflow tasks. Meaning, it is very likely that you will encounter a helpful plugin instead of creating a custom solution.

Node – in the simplest setup, Jenkins instance will be running on one machine and all jobs will be executed there. For minor tests and small number of jobs, it makes sense. However, in practice, there are often cases when multiple teams use same Jenkins instance. Since they have large number of jobs, execution on one instance is considered as bad practice for number of reasons: security, disaster recovery, performance, scalability, etc.

Enter master/slave nodes in Jenkins-  Jenkins master is used only for job scheduling that will be executed on Jenkins slave machines. This way, Jenkins master machine is not heavily utilized and teams have their own slave machines with the size most suitable for their test automation project. Also, slave nodes are then configured to handle some number of parallel jobs that are executed (number of executors per each node). There is also a possibility to configure on-demand nodes from AWS. That would mean nodes will exist only when job needs to be executed on them. This is very useful, since we want larger machines that will be fully utilized only when regression tests are running. For this particular scenario, larger EC2 instance would be spinned up on AWS, job will be executed on this instance and when completed (based on idle time configured), this instance would be alive for some time. After that, it would be determined which is more advantageous when using services paid per hour (e.g. AWS services). 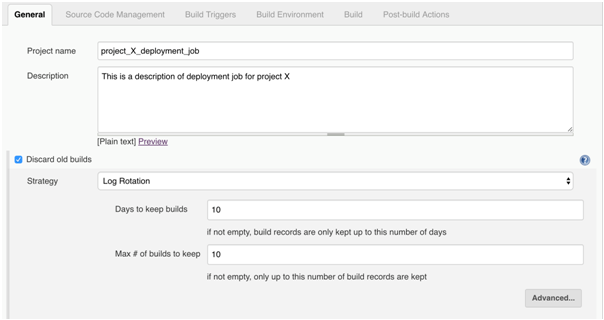 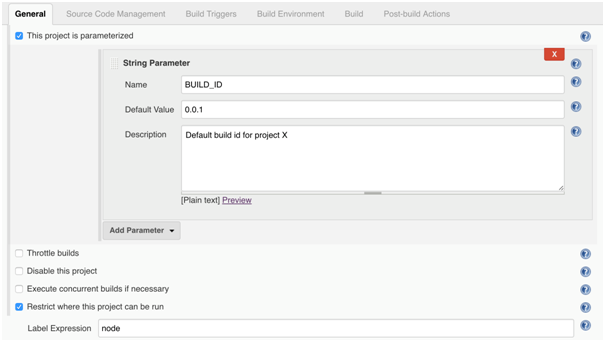 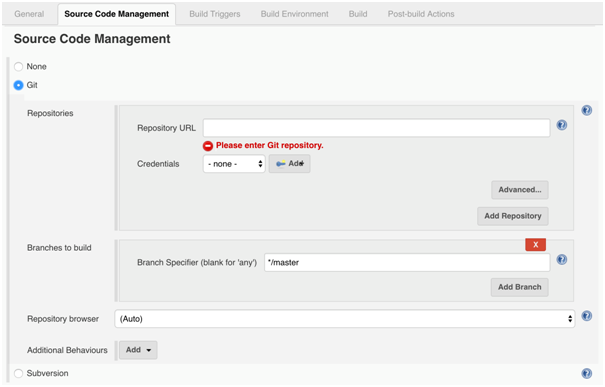 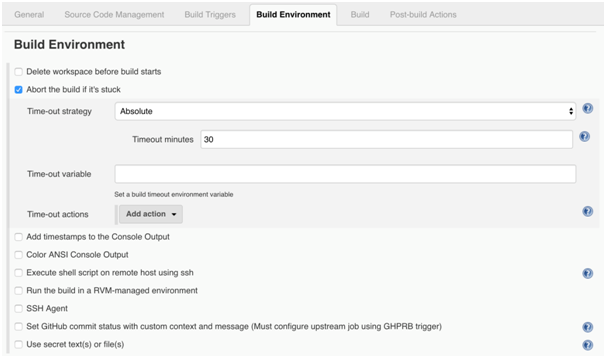 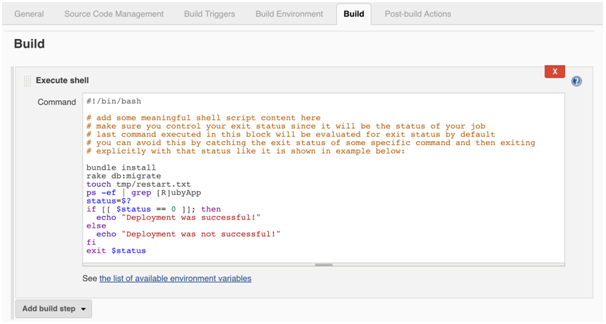 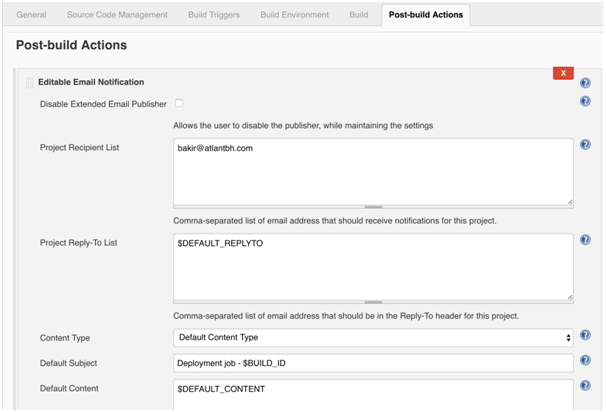 Notice how $BUILD_ID is specified in email’s subject line. Since this job is parameterized, this value is specified when starting this job. This parameter can be used in both Jenkins Build and Post-build action parts of the job.

By now, you are aware of the major advantages of Jenkins CI server and how CI itself adds to the software development process and to a test engineer as well. Same as with every other technology, it takes time to grasp the basics and experience the advantages. I highly recommend investing time into CI, it will definitely be worth it in the long run. Especially, once applying Jenkins CI server, many painful and repetitive procedures will be automated and suddenly you will have more time to focus on product improvements.

-Does your team implement Continuous Integration and Jenkins CI server as well? Feel free to share your team’s experiences and ask questions in the comments!