Update: We’ve released a new trends article, have look at test automation in 2016  – “Test Automation Tools and Trends for 2016“.

As we enter the last quarter of 2015, analysts are beginning to think about how to sum up an incredible year for test automation, its growth and the changes it has gone through. As reflected through the Google Trends (images below), clearly 2015 has brought in a continuous growing interest in open source automation frameworks. Below is a comparison between some of the leading test automation platforms. 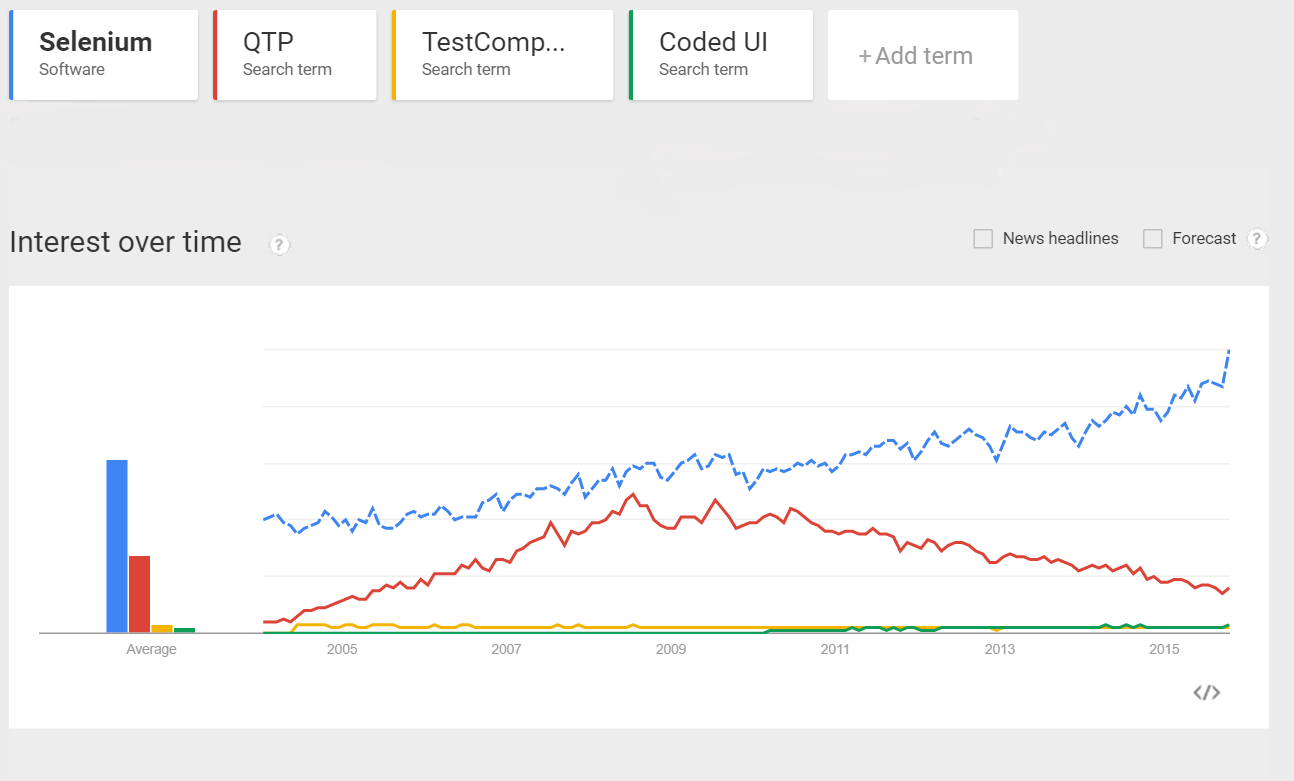 There is no doubt that the unquestioned leader is Selenium, which appears to be rapidly growing since 2005 and has gained more and more popularity throughout the last few years. As for today all major browser developers are developing selenium drivers (plugins) for their browsers.

It is definitely enough of a motivation for the leading test automation product vendors, to include selenium as part of their solutions, as it is done by SmartBear (TestComplete) which allows using Selenium WebDriver tests in a TestComplete Test Project, Microsoft TFS 2013 Selenium components for coded UI and part of Microsoft Functional testing service, this trend is expected to continue growing during 2016 and positioning Selenium as a consensus in the test automation field. 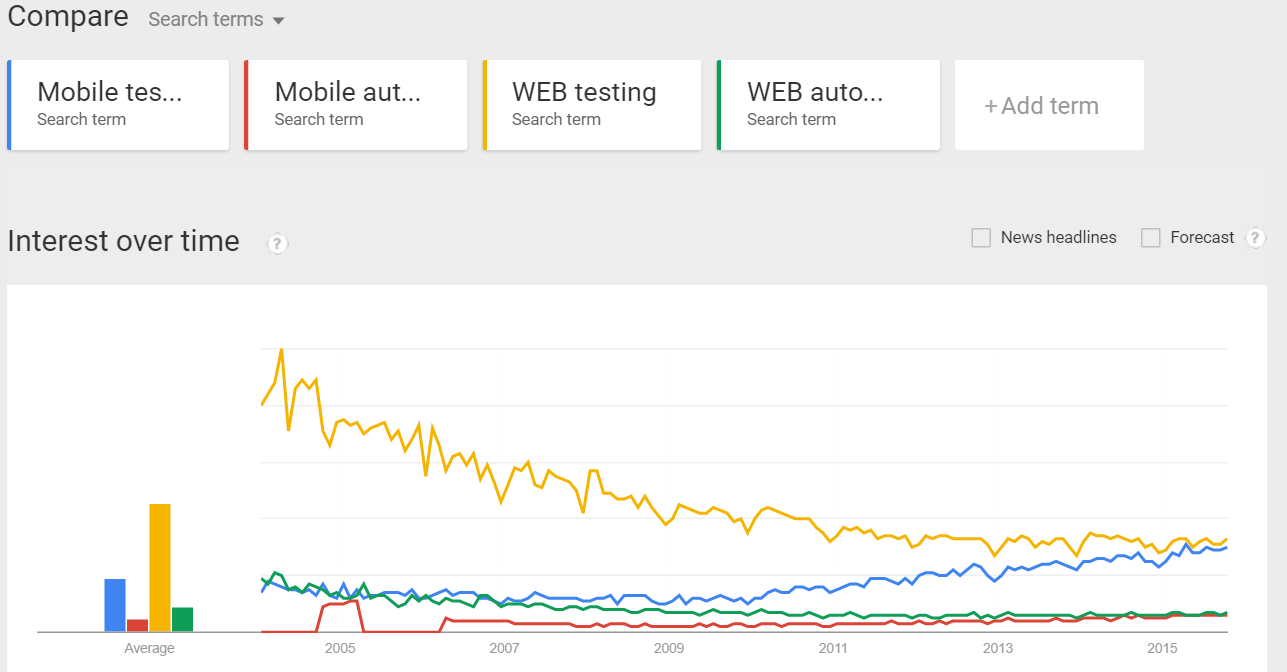 This shouldn’t come as a surprise considering the fact that smartphones and tablets are taking over our personal computer usage. Mobile application market is growing rapidly every day and the test automation market follows. 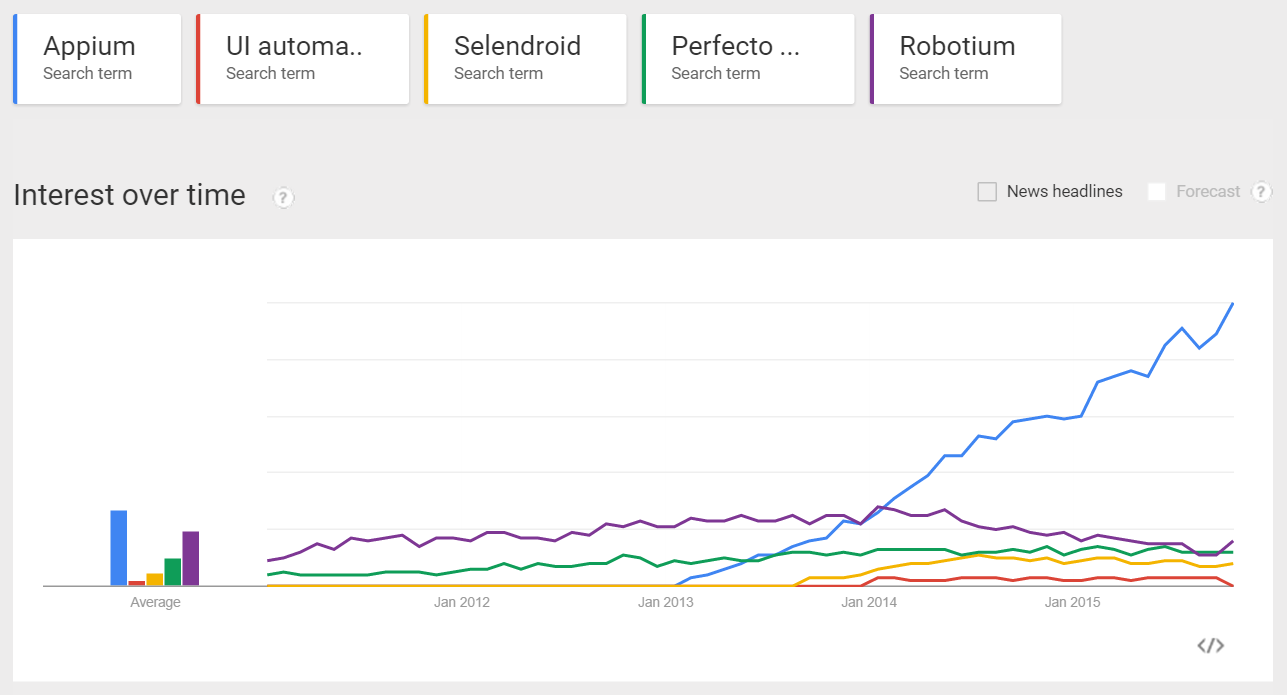 With the growing interest in mobile test automation more and more open-source platforms emerge to fill the vacuum. One of the most used frameworks, is Appium, an open source automation testing framework for native, hybrid and mobile web browsers. It drives iOS and Android applications using the WebDriver protocol. At the moment, Appium is the rising star in the mobile test automation field and its popularity is growing exponentially!

There are other frameworks that are definitely worth mentioning, such as selendroid an open source framework that enables test automation for native and hybrid Android based applications. Those who would like to use selendroid to test iOS can use Xcode and selenium web driver that will do the job.

Vendors’ automation tools, like Robotium and TestComplete Mobile, also provide mobile testing solutions and get great feedback that provide the required flexibility to test both iOS and Android based applications.

Another popular trend seen in the past year is the complementary cloud based testing lab service. Companies such as Browserstack, Saucelabs, Ravello, offer solutions that allow companies to run compatibility and functional tests on different environments and browsers. It is also suggested to run selenium based scripts to execute test cases automatically on their remote environments as part of the customers’ CI process.